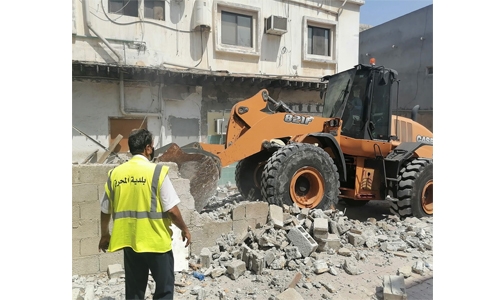 Muharraq Municipality announced removing illegal construction from one of the streets in the Arad region, following a court order. The demolished buildings, Municipal officials said, had encroached on the government property.

The Court order followed the failure of the owners of the violating buildings to correct the situation. The encroachments were on a property adjacent to a housing project of the Ministry of housing meant for building a corridor. Some of the violating structures were on the property, while others were partly encroaching.

“Despite serving notices and warnings, the homeowners refused to budge, attracting legal action,” the municipality said. The actions were in line with Decree No. (13) of 1977 regarding Building Regulations Law and Law No. (42) of 2014, amending some provisions of the Regulation Law Buildings and Decree-Law No. 2 of 1996 regarding public road works.

The Muharraq Municipality also called on citizens and residents to adhere to municipal regulations and report violations through 17984027 or social media or Tawasul on 80008001.