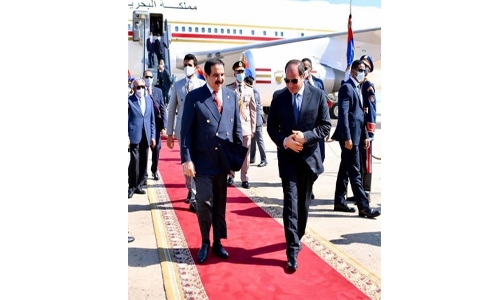 His Majesty King Hamad bin Isa Al Khalifa yesterday offered full support for resolving the crisis over the Grand Ethiopian Renaissance Dam and safeguarding the rights of Egypt to its share of water in the Nile river.

Bahrain, HM King Hamad said, supports all efforts for reaching a binding agreement to resolve the issue. His Majesty also reiterated the solidarity of Bahrain with Egypt and Sudan in all steps aimed at protecting their legitimate rights and water security. HM the King was holding a meeting with Abdel Fattah Al-Sisi, the Egyptian President at Sharm El-Sheikh, Yesterday.

The talks also followed a statement by the UN Security Council encouraging Egypt, Ethiopia and Sudan “to resume negotiations” under the auspices of the African Union to swiftly conclude a deal on the controversial mega-dam on the Nile.

During yesterday’s talks, King Hamad and Al-Sisi also underscored the importance of cooperation to foster peace in the Middle East and reaching a just, permanent and comprehensive solution between the Palestinians and Israelis based on the two-state solution.

The leaders also re-affirmed support to the Saudi initiative to stop the war in Yemen and reach a political solution to the crisis there.

HM King said it is crucial to achieving peace and stability in Afghanistan, pointing out Kingdom’s effort to provide urgent relief and humanitarian aid to the Afghan people.

His Majesty the King also presented an invitation to the Egyptian President to visit Bahrain, which was accepted thankfully and will have its date fixed later.

King Hamad thanked the Egyptian President for the invitation to visit Egypt and the gracious welcome and hospitality. His Majesty also praised the development strides witnessed by Egypt under the leadership of President Al-Sisi, describing them as an inspirational experience in achieving sustainable growth.

HM King’s praise is badge of honour we wear with pride: Shaikh Nasser