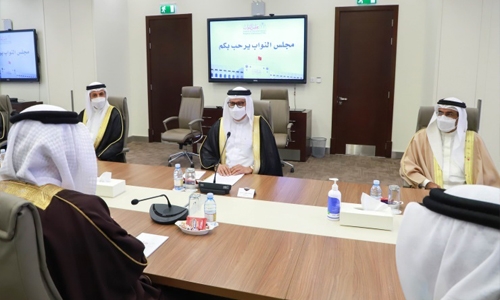 Minister of Foreign Affairs Dr. Abdullatif bin Rashid Al Zayani has briefed the parliament on Bahrain’s efforts regarding the latest developments in Afghanistan

The minister said the meeting aimed to inform the parliament on the latest developments in Afghanistan and Bahrain's efforts to provide humanitarian aid to the Afghan people based on relations between the two countries and taking into account the humanitarian situation there.

Bahrain was following the unfolding of the events and developments and the Kingdom remained in contact with various brotherly and friendly countries, he said.

The developments in Afghanistan required quick evacuation within the framework of international cooperation, the minister added.

Bahrain had received a request from the US government to assist in the evacuation efforts, and the Kingdom responded by providing support and assistance with the evacuation operation. The Kingdom received flights from Kabul at Bahrain International Airport in preparation for the transfer of the evacuees to the intended destinations.

“The evacuation was carried out according to plans, using the Kingdom as a transit point before evacuees could reach their final destinations. The competent authorities took the necessary measures in accordance with the corona pandemic precautionary measures,” the minister said.

He added that Gulf Air operated the first evacuation flight to the United States of America as part of the evacuation operations from Afghanistan within the framework of international relief efforts and humanitarian solidarity with the Afghani people.

Al Zayani said that His Royal Highness the Crown Prince and Prime Minister had received phone calls from US Vice President Kamala Harris and from US Secretary of Defense Lloyd Austin, in which they expressed gratitude to the Kingdom for its contributions.

Al Zayani said the royal initiative aimed to assist brothers and friends and help the afflicted and the needy in various parts of the world is within Bahrain’s endeavors to reinforce international solidarity based on the fraternal and humanitarian ties it has with various peoples.

The minister informed the parliamentarians about the call he had received from the US Secretary of State who expressed his thanks for the support and assistance provided by Bahrain as part of its humanitarian and evacuation efforts.

Al Zayani also gave a brief on the Kingdom’s close follow-up on the situation in Afghanistan and its coordination with friendly and brotherly countries, especially the Gulf Cooperation Council (GCC) states, to ensure all parties remain committed to working together to help achieve peace, stability and security, and protect lives and property in Afghanistan in line with its people's aspirations.