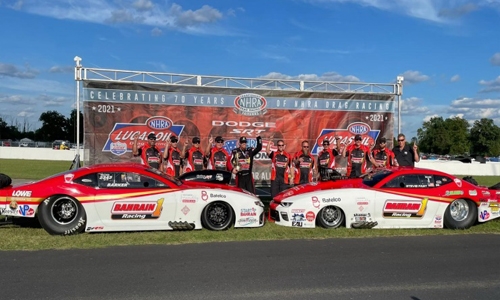 Shaikh Salman praised the victory of Bahrain1’s Jeffery Barker where he narrowly beat teammate and back-to-back world champion Stevie “Fast” Jackson in the meeting’s final round.

“To have two of the team’s drivers finish first and second in such a highly competitive class of the top drag racing series in the world is absolutely fantastic! It shows the quality of the entire Bahrain1 Racing team, which starts with their leadership under HH Shaikh Abdullah bin Hamad Al Khalifa,” Shaikh Salman said.

“Bahrain1’s success today and over the years has always been an inspiration and a source of joy for all motorsport lovers in the Kingdom of Bahrain. Bahrain1 have always been at the forefront of raising our nation’s flag in the international sporting arena, and we look forward to this latest achievement spurring the team on to even greater successes in their coming races. Our heartfelt congratulations to HH Shaikh Abdullah, Jeffery and Stevie, and to the entire Bahrain1 Racing crew!”

Barker was able to claim his first career win in Indianapolis over the weekend. He clocked a winning time of 5.742 seconds at 251.67mph down the strip, overcoming Jackson’s 5.785s at 248.29mph.

Jackson moved up to second place on the Pro Mod class’ 2021 championship standings where he is now 66 points behind the current leader.

Bahrain1 Racing are expected to be back in action on the drag strip from September 17-19 in Charlotte, North Carolina.