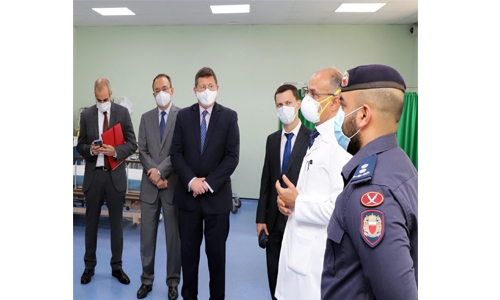 The Bahrain-European Association for Social Networking yesterday categorically rejected the accusations levelled against Bahrain by British MP Wayne David as “baseless” and invited him to review and learn about the developments of the Kingdom in all areas, including in human rights.

“Every Bahraini citizen and resident enjoy all their rights in the Kingdom,” the statement said, adding that the Kingdom also requires everyone to abide by their duties towards the state and society, like Britain or any other nations for security, stability and development.

The Association also called on the MP to reach out to the independent rights organisations in the Kingdom for further clarifications. “The goal of Bahrain’s government is to serve its citizens and not terrorism, which is killing the world and causing millions of deaths around the world.”

“It is creating hunger, poverty, fell regimes and spread insecurity and wars.” “This is the inevitable result of those supporting terrorism and calls for releasing terrorists.”

The Association called on Wayne David, Labour MP of Caerphilly, to respect relations with Bahrain before interfering in its internal affairs to defend someone convicted of terrorism charges.

The MP’s actions, the Association said, is an explicit violation of international and United Nations efforts to combat terrorism and drying up its sources.

The MP who should be dealing with matters concerning his nation, the Association said, is rather engrossed in interfering in the internal affairs of other countries without understanding what he is talking about. “The statements by the MP, in it entirely, have its focus on the accounts of fugitives, rather than facts,” the Association said.

Before moving against a country having close ties with Britain and resorting to politicise rights issues to serve narrow interests, the MP should see what the laws of both countries say about crimes ranging from murder, rape and harassment.

The Association also pointed out that the British Ambassador, Roddy Drummond, during his visit to the Correction and Rehabilitation Centre in Jaw, described it as a “transparent” initiative.

“I was pleased to visit Jau prison on 3 May with other Ambassadors. We were shown a well-run facility, with good medical provision and measures against Covid, with vaccinations offered to all prisoners. I welcome this initiative by the authorities to be more transparent,” Drummond wrote on his twitter account following the visit.