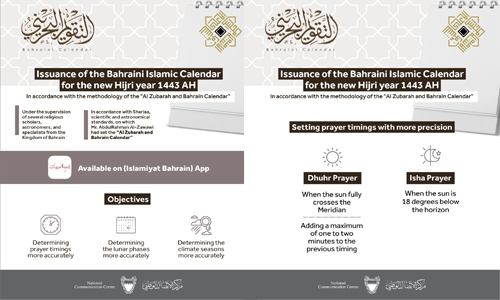 An updated, more accurate version of the Bahraini Calendar for the Hijri new year 1443, based on the “Al Zubarah and Bahrain” methodology, was launched yesterday. The Calendar, which follows the Sharia, scientific and astronomical standards, is launched as per the directives of His Majesty King Hamad bin Isa Al Khalifa.

The Committee, with several religious scholars, astronomers, and specialists, worked tirelessly to enhance the accuracy of prayer timings and setting the Hijri months. Explaining, he said, as per the Bahraini Calendar, “the real entry time for the Isha prayer occurs when the sun is at 18 degrees below the horizon, as per the methodology of the “Zubarah and Bahrain Calendar.”

“Zubarah and Bahrain Calendar” calculated the entry time for prayers astronomically instead of the conventional method, which adds 90 minutes to the time of the Maghrib prayer throughout the year.

“The time difference between the Isha prayer, according to the previously established standard, and the astronomical time method (i.e when the sun is below the horizon by 18 degrees) will be at its most on the 21st of March and the 22nd of September, and will be 14 minutes.” “The difference, on the first of Muharram 1443 AH, corresponding to the 9th of August 2021 AD, will be 7 minutes,” he said, adding that there will be no difference between the two timings from 8 – 29 June.

In the new version, the time of the Dhuhr prayer occurs when the sun crosses the Meridian, unlike previously when the Merdian was at the centre of the sun disk. He pointed out that the time difference will be one minute to a maximum of two minutes from previous calculations.

The Supreme Council for Islamic Affairs and the Supreme Committee for Bahraini Calendar, he said, is working on a campaign to introduce the new version with other official bodies.