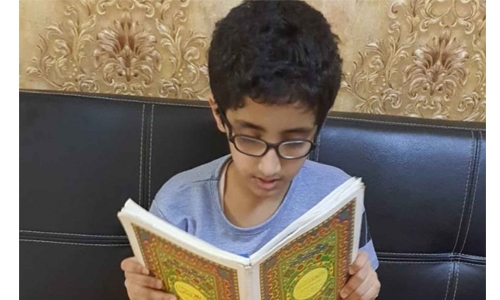 Great joy has filled the heart of Othman Yahya after his son Ibrahim, who has been diagnosed with autism, excelled academically at Al Khwarizmi Primary School for Boys aside from his remarkable brilliance in memorising the Holy Quran.

In a meeting with the guardian, features of happiness and pride were visible on the father’s face.

“I am proud that a government school embraced my son,” said Othman, who praised the policy of the Ministry of Education to integrate people with special needs into society.

He noted that his son had excelled remarkably in his studies since he was transferred from the private class to one of the regular classes, lauding the close and continuous follow-up by his teachers, and their great role in raising his academic achievement.

Othman added that the school had a major role in nurturing Ibrahim, as a positive change has been observed in him every year on the personal and academic levels.

This support is provided by the school administration and all the teachers who embraced the student and contributed to his reaching high academic, personal and social levels, he noted.

Othman talked about the family’s cooperation with the school, especially during this time of the pandemic, which resulted in the daily follow-up and the creation of the appropriate atmosphere for reviewing and solving assignments.

The school’s encouragement enabled his son to get involved his son in Holy Quran memorising competition.

He extended his thanks and gratitude to his teachers, especially the programme coordinator, teacher Rabab Fateel, who contributed to developing Ibrahim’s knowledge and personal development.