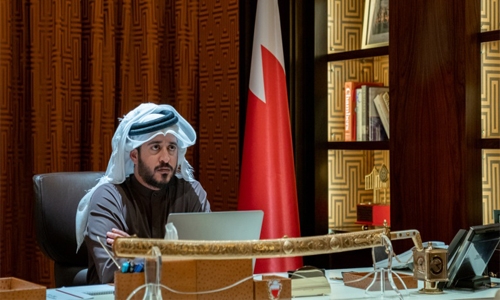 HH Shaikh Khalid commended the efforts of the Finance Ministry to implement the visions and aspirations of the government, led by His Royal Highness Prince Salman bin Hamad Al Khalifa, the Crown Prince and Prime Minister, in order to enhance Bahrain’s progress.

HH Shaikh Khalid discussed with Shaikh Salman areas of cooperation between the GSA and Finance Ministry, in addition to topics of mutual interest.

HH Shaikh Khalid also reviewed a number of plans, programmes and strategies that the GSA seeks to implement in the coming period to contribute to developing the sports system in accordance with the Bahrain Economic Vision 2030 and the Fiscal Balance Programme aimed at reaching a balance between government expenditure and revenues by 2022.