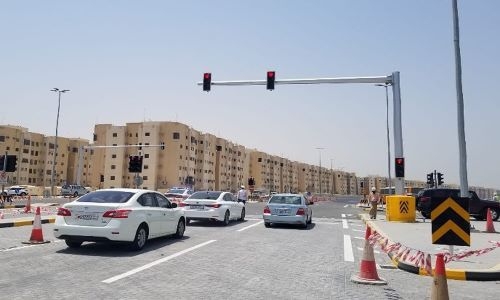 The Ministry of Works, Municipalities Affairs and Urban Planning has opened a new traffic light on the northern Shaikh Zayed Road at its intersection with Street 8.

It is one of the important strategic development projects on the main road network in the Kingdom. It represents the main artery for transporting traffic from the villages of Aali and Salmabad and Madinat Zayed towards Shaikh Khalifa bin Salman Street to Manama and vice versa.

The project will ease access to the educational district in Isa Town and solve the traffic jams in front of the Driving School and Bahrain National Stadium. The total value of the project is BD23,400,000, funded by the Abu Dhabi Fund for Development.

The first phase of work on the traffic light within the Shaikh Zayed Road development project started in August 2019. The first part was opened on 16 December Street according to the time plan in November 2020, while the second part was opened last February. The traffic light on the same street with the southern intersection of the Al Ramli entrance was also opened early this month