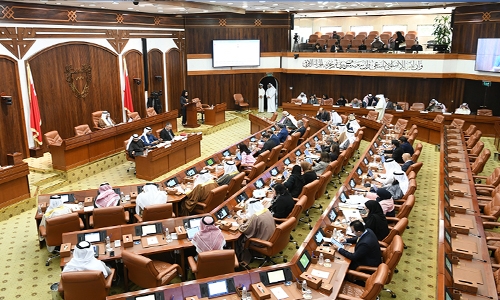 The Shura Council has discussed more than 100 decrees, draft and law proposals, as well as projects, during the fifth legislative’s third ordinary session.

There were a total of 30 sessions, 29 of which were regular and one was extraordinary. This was based on the statistics and official data issued by the Council’s General Secretariat.

Twelve law decrees were approved by the parliament during the third session. The parliament and its committees discussed 61 draft laws, nine final accounts, and 20 law proposals.

The draft laws received the highest percentage of the total topics discussed by the Council, reaching 60 per cent, followed by proposals for laws at 19 per cent.

The percentage of decrees in laws reached 12 per cent and the final accounts for 9 per cent of the total topics. There were 29 draft laws and 32 projects referred from previous sessions.

The Council returned 11 projects to the House of Representatives. There are seven draft laws still being studied by the Council committees, while nine draft laws are ready for discussion at the Council in the next session.

The Council completed discussions on seven final accounts, and their reports were submitted to the government. Two final accounts are still under consideration by the Financial and Economic Affairs Committee.

The Council has one report ready for a discussion about a law proposal that had already reached the relevant committee. The proposals for laws that the Council submitted to the government included the following: strategic stocks of goods, the establishment of the Supreme Council for Medical Studies, organisation of the activities of sports centres and academies, and an amendment to Clause (a) of Article (99) of the Labour Law.

In the private sector, the proposals for laws that the Council submitted to the government included the following: promulgation by Law No. (36) of 2012 and its amendments, the establishment of a Center for Settlement and Resolution of Sports Disputes in the Kingdom of Bahrain, amendment to the text of Article (21) of the Court of Cassation Law promulgated by Decree Law No. (8) of 1989, and its amendments, and concerning stem cells, as well as the establishment of the Public Authority for Food Security.

A total of 40 questions were directed by Council members to ministers about economic, financial, service, health, educational, food and other fields.