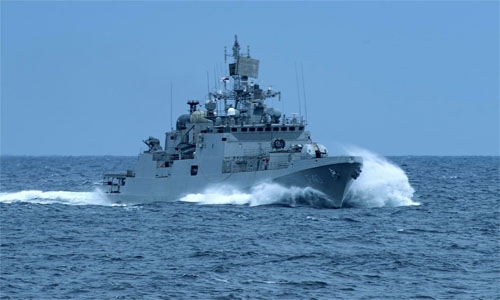 Indian Naval Ship (INS) Talwar, a guided-missile frigate of the Indian Navy, is to arrive at Mina Salman Port today.

In the framework of the deep-rooted friendly ties, multi-faceted and growing cooperation between India and the Kingdom of Bahrain, Indian Naval Ships have been frequently visiting Bahrain.

INS Talwar (F40) (translated as ‘Sword’) is the lead ship of Talwar class Guided Missile Frigates and was commissioned into the Indian Navy on June 18, 2003.

One of the potent warships of the Indian Navy, she displaces about 3700 tons and is capable of speeds in excess of 30 knots (about 55kmph).

Equipped with an impressive array of weapon and sensors, the ship is capable of addressing and neutralising threats from the air, sea and undersea.

The ship’s combat power is supplemented by its integral Helicopter.

The formidable ship is run by a professional and motivated team of 25 officers and 220 sailors.

The ship is presently being commanded by Captain Satish Shenai.

Against the backdrop of the prevailing maritime security situation in the Gulf region, the Indian Navy had commenced Maritime Security Operations named Operation SANKALP, in the Gulf Region in June 2019 to ensure the safe passage of Indian Flag Vessels transiting through the Strait of Hormuz.

Indian Naval Ship Talwar is presently deployed for Operation SANKALP in the Gulf Region in pursuance of the Indian Navy’s commitment towards ensuring the safety and security of maritime trade.

On March 11, 2021, whilst deployed in the Gulf of Oman as part of the operations, the ship received a distress call from a stranded UAE flagged cargo ship MV Nayan requesting assistance.

The cargo ship on transit from UAE to Iraq was adrift since March 9, 2021, owing to failure of propulsion, power generation machinery and navigational equipment.

INS Talwar deployed its teams which worked tirelessly for over seven hours and enabled the ship to resume her passage.

While the ship’s visit to Bahrain is a testimony to the friendly ties between India and Bahrain, it also highlights the Indian Navy’s commitment to building cooperative partnerships with friendly nations of the Indian Ocean region to develop solutions to meet maritime challenges together.

Get vaccinated and strictly adhere to all precautionary measures: Bahrain Health