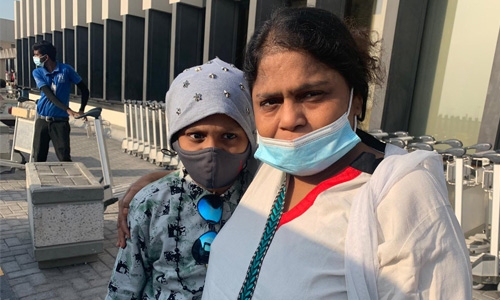 Fathima finally gets her son back

Indian Fathima fought for years to get her son from her cheating husband and his girlfriend. However, when she finally managed to, it was along with many legal tangles related to her son’s nationality.

Yet, despite the adversities, she kept her battle alive to save her son. Finally, her ordeal came to a successful conclusion last Thursday.

Fathima secured an out pass from the Indian Embassy with the help of Sudheer Thirunilath, the Director of Humanitarian Aid, Middle East Region. Thirunilath told The Daily Tribune (TDT), “They flew back to a new life this Thursday.”

However, reaching this point was not an easy task for Fathima, whose original name is Lilly Kumara Potla. After landing in Bahrain for the first time years ago as a domestic worker, she lost her family’s support after converting to Islam and marrying Ahmad Rauf Ali, an Indian citizen.

According to her, they got married with the blessings of a ‘Sheikh’, but failed to register the marriage. However, life went on smooth until she became pregnant. “Things went awry with the birth of our first child,” Fathima told TDT.

Her husband complicated the things further by writing just ‘Fathima’ in hospital records instead of her legal name. “Finally, the hospital refused to record the child as mine,” Fathima said.

The worst was yet to come. A few months back, her husband asked Fathima to return to India to correct her legal status. “I should not have done that,” she admitted. “I trusted him to take care of the child, but that never happened. He never bothered to bring me back and started living with another woman.”

Fathima tried frantically to get her child back, but with no success. In between, justice took its course, with Ahmad landing in jail for kidnapping a woman. The court gave him a short jail term, but a jailbreak attempt increased that to 17 years.

Compounding her agony, Fathima also failed to find where her kid was, as Ahmad’s girlfriend was not ready to hand the child over. When asked, the other woman claimed that she had “sent him to India.”

Things then took a different turn when the girlfriend suffered a massive heart attack. During her final moments, the woman revealed to Fathima that the “child was with her new boyfriend.”

Finally, the boy was reunited with his mother. “For the long three years, she tortured my kid.”

“The other mother used to beat me, burned my body and hit me every day,” the nine-year-old recalled with tears in his eyes. However, without a legal document to prove her marriage, her son remained stateless. Without access to legal protection, education, health care, it was a vulnerable position. Fathima continued to knock doors. That ordeal came to an end this Thursday. With the help of Mr Thirunilath, Lilly Kumara Potla and her son Shareef Ahmad Mohammed flew back to India.

Earlier this year, Ahmad also got his life back through a royal pardon and returned to India in March 2020. However, before leaving he signed an affidavit authorising Lilly Kumara Potla to personally accompany her son from Bahrain to India.

Mr Thirunilath told TDT that the boy born in 2010 remained stateless until then, as there were no legal documents to prove his parents’ marriage. “We arranged all the necessary documents, with the help of the Indian Embassy. The Embassy also issued a legal out pass to facilitate his travel to India. The child travelled to Hyderabad and will join his father there. They boarded a flight to Hyderabad Thursday.”