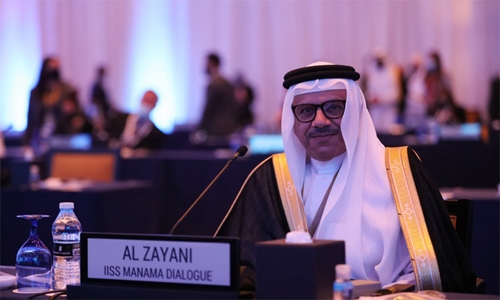 The Director-General and Chief Executive of the International Institute for Strategic Studies, John Chipman, delivered a speech in which he welcomed the participants, and commended the Kingdom of Bahrain for hosting such an important forum.

The Secretary of State of the United States of America, Mike Pompeo, delivered a speech in which he thanked His Majesty King Hamad bin Isa Al Khalifa and the Government of Bahrain for hosting the forum, highlighting the role of the Kingdom in enhancing peace and security in the region and the world.

He added that almost four years ago, President Donald Trump's Administration saw that the real cause of the conflict in the Middle East was not the Israeli-Palestinian conflict, but rather the presence of Daesh and the Iranian regime, which is the largest state sponsor of terrorism in the world. He stressed that the US has started its approach in the Middle East by leading the war against Daesh with its allies, achieving multilateral victory.

As for the Islamic Republic of Iran, Secretary Pompeo affirmed that the United States of America views the Iranian regime as an anti-Western and anti-Semitic government that is terrorising its people and its neighbours in the region, pointing out that sending money to the Iranian regime did not change Iran's behaviour in the past but rather encouraged its terrorist campaigns.

He highlighted the achievements of the US in the past period, as it withdrew from the Joint Comprehensive Plan of Action (JCPOA), which was trading money and immunity for the Iranian regime's malign behaviour in exchange for unverifiable nuclear pledges that put everyone at risk. He asserted that, with the help of allies in the Gulf region, the maximum pressure campaign had isolated Iran diplomatically, militarily and economically.

He also indicated that the signing of the Abraham Accords in the White House in September would not have been possible without the campaign of maximum pressure and the active diplomacy of the United States of America with its powerful allies in the region, expressing his pride in meeting the Minister of Foreign Affairs of the Kingdom of Bahrain in the State of Israel a few weeks ago, where the United States of America, the Kingdom of Bahrain and the State of Israel held their first tripartite meeting. He also affirmed that more countries will follow suit in this regard as it is the right decision for the benefit of their people.