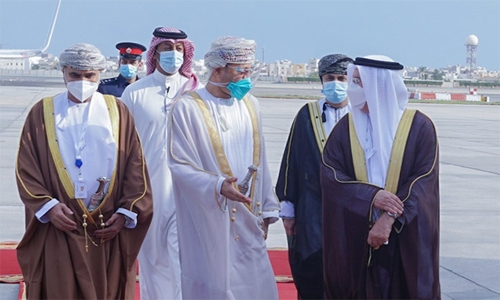 The Minister of Foreign Affairs of the brotherly Sultanate of Oman, Sayyid Badr bin Hamad bin Hamoud Al-Busaidi, arrived in the Kingdom of Bahrain today to participate in the 16th Manama Dialogue.

Upon his arrival, the Minister was received by the Undersecretary of thhe Ministry of Foreign Affairs for Regional and GCC Affairs, Ambassador Waheed Mubarak Sayyar, and the Ambassador of the Sultanate of Oman, Dean of the Diplomatic Corps in the Kingdom of Bahrain, Abdullah bin Rashid Al-Mudailawi.