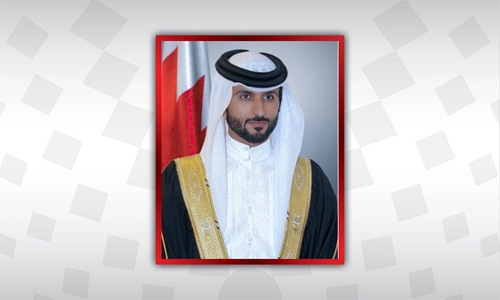 HM the King’s Representative for Humanitarian Work and Youth Affairs, His Highness Shaikh Nasser bin Hamad Al Khalifa, has affirmed that the Kingdom of Bahrain has become a role model to be emulated in urging the International Community, youth and civil society organisations to launch the initiatives that contribute to the optimal implementation of the Sustainable Development Goals (SDGs).

HH Shaikh Nasser asserted that the kingdom also assumed its international responsibilities in this field through the launch of the “King Hamad Award for Youth Empowerment to achieve the SDGs”, noting that it is the first international award that urges the International Community to provide youth with an opportunity to present their ideas and projects that contribute to achieving UN goals.

HH Shaikh Nasser pointed out that the third edition of the “King Hamad Award for Youth Empowerment to achieve the SDGs” has achieved remarkable success, as reflected in the massive participation by various segments, noting that as many as 4,064 initiatives and projects from more than 100 countries have been presented.

HH Shaikh Nasser affirmed that the number of nominated projects and initiatives in this edition exceeds that of the previous one, which, he said, proves the good reputation of the award at the international level, and indicates that the International Community considers it as the best platform to present ideas and programmes that contribute to achieving UN goals.

HH Shaikh Nasser stressed that the Kingdom's insistence on continuing the award and linking its objectives with the support for the SDGs’ sectors that have been most affected by the Coronavirus pandemic and ways to overcome the challenges represent a major qualitative leap in the award, and affirm Bahrain’s commitment and responsibilities towards achieving UN goals and how to face the damage caused to those sectors as a result of the pandemic.

HH Shaikh Nasser affirmed that the third edition of the award and the noble goals it carries enabled young people to present their ideas and initiatives on how to achieve sustainable development goals despite the challenges facing the world in the current period and gave them the opportunity to be essential partners in achieving global development goals.

HH Shaikh Nasser stated that the previous editions of the award had carried many distinguished and pioneering ideas and projects that contributed to the implementation of distinguished international programmes in this field, voicing great confidence in the ability of the participants in the new edition, including youth and organizations, to come up with initiatives that contribute to supporting the sectors affected by the pandemic.