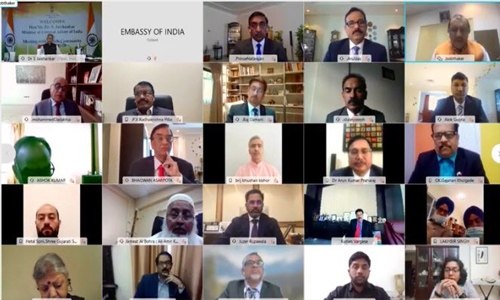 Bahrain and India are headed towards a new era of ties thanks to official visits by high-ranking leaders between the two countries, according to a leading Bahraini businessman Mohammed Dadabhai.

The Dadabhai Group chairman and managing director said this yesterday during a virtual community interaction session hosted by the Indian Embassy and attended by Indian Minister of External Affairs Dr S Jaishankar, who is on an official visit to the Kingdom.

Dadabhai highlighted that Bahrain has always been welcoming to Indian expatriates and has “stood with the Republic of India in testing times”.

“We are at home here even if we are away from home,” Dadabhai said, expressing his thanks to Dr Jaishankar for coming to Bahrain.

He added that such continued visits would enhance the relationship between the two friendly nations. “Honourable Minister, your visit will bolster the ties between the two countries and will strengthen our resolve for greater cooperation,” Dadabhai stressed.

“Today when India has strengthened their position among the world nations, we are looking forward to a new era in the relationship of the Republic of India and the Kingdom of Bahrain.”

Thaker praised Bahrain’s long tradition of extending hospitality and tolerance towards peoples of all faiths and backgrounds who have arrived on its shores from the time of the Dilmun civilisation in 3,000 BC.

“This tradition of tolerance has created a culture of plurality and exchange whereby Bahrain’s diverse community, given individual rights of worship, were also given the opportunity to actively engage in the country’s development,” he said.

Thaker noted that THMC is currently undertaking a redevelopment project on the Krishna Temple located in the heart of the Manama Souq. Built nearly 200 years ago, it is known to be the first Hindu temple in the Gulf Region, and its establishment was seen as a shining example of the secularism practiced in Bahrain. It is where the majority of the Hindu community celebrates its many festivals all around the year.

“This temple is a standing testament to the strong ties that the Hindu community has with Bahrain,” Thaker explained. “THMC, which owns the property, has ambitious plans to completely redevelop the complex.”

Thaker noted that last year, Indian Prime Minister Narendra Modi inaugurated the project, which costs nearly Rs 35 crores. It will be fully funded by the Bhatia community, will have 45,000sq feet of built-up area, prayer area, five state-of-the-art auditoriums, two kitchens, a museum that will trace the history of the Bhatia community, and a knowledge center. “We believe this iconic project will showcase the deep relations between the two countries and will stand as a testament of the impact of the Indian community in Bahrain,” Thaker added.

Also during the community interaction, the challenges faced by the Kingdom’s Indian community as a result of the coronavirus (Covid-19) pandemic were raised.

Joseph spoke about the plight of many workers and their families, and how The Indian Club was able to charter more than 20 repatriation flights for over 3,000 countrymen over the last few months.

The club was also able to support members of the Indian community with thousands of food grain kits and free medical aid, especially for those who were most in need. Natarajan talked about ISB’s implementation of the new education policy of India. He said that ISB is the largest community school, with around 12,000 students and 700 staff members, and added that ISB supports more than 1,000 students every year in providing fee concession and other support. But due to the Covid-19 crisis, many more students’ families are in need of some help.

Natarajan appealed to Dr Jaishankar for the Indian government to support such community schools with a very low fee structure, and requested that the minister provide concessions to Indian students for air travel.

On his part, Damani requested the minister to look into the possibility of signing an Avoidance of Double Taxation Agreement (DTA) with Bahrain. He stressed that such an agreement would motivate businessmen in the Kingdom to invest in India.

Meanwhile, Pillai revealed that thousands of Indian workers have had to leave the Gulf in recent months without getting paid their full salaries and terminal benefits. “A mechanism should be put in place to help such workers get their dues,” Pillai suggested and added that an interim relief of at least Rs 1,00,000 should be paid to the families of Indian workers who have died in the Gulf due to Covid-19.

Raj highlighted that the ICRF has provided over 20 streams of urgent support to the community. These include the distribution of over 40 tonnes of food, the activation of health awareness campaigns, and the financial backing over the years of over 500 families, which have come to about Rs 5 crores.

Furthermore, the scope of the funds used from the Indian Community Welfare Fund was raised during the session, including increasing the number of embassy staff, and the possibilities of establishing Indian Higher Education Institutions in Bahrain.

In closing the community interaction session, Dr Jaishankar thanked all those who took part and said that he looks forward to coming back and visiting Bahrain again in the future.

He addressed some of the issues raised by the conference’s participants, saying that their concerns will be looked into by the government. Among these is the implementation of a DTA between Bahrain and India, air travel concessions for Indian students in the Kingdom who are most in need, and the Indian government’s commitment to globalization by “strengthening at home to do better in the world”.

Dr Jaishankar expressed his appreciation to all those in the community who took up worthwhile initiatives to assist their fellow-Indians in light of the Covid-19 crisis. He also encouraged the Indian community to maintain their high level of education, saying that it is something Indians are known for across the globe.