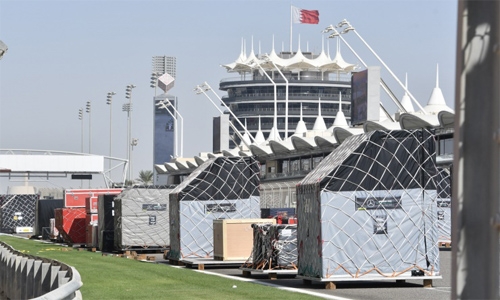 Bahrain International Circuit (BIC) is all ready to host on Thursday the first of the weekend’s events in the Formula 1 Gulf Air Bahrain Grand Prix 2020.

In preparation for the start of racing on Friday (November 27) at “The Home of Motorsport in the Middle East” in Sakhir, a number of important activities need to be undertaken by the F1 teams, drivers, and race officials.

The teams will be able to go for their customary track walk on Thursday afternoon around BIC’s 5.412-kilometer Grand Prix circuit. This gives a chance for the sport’s star drivers and their engineers to examine the track up close and gain additional data for their car set-ups.

There will also be system checks conducted later in the day by the Federation Internationale de l’Automobile (FIA) and F1, along with a track inspection and high-speed track test involving the FIA Safety and Medical Cars. These will be lapping the track and the necessary tests on all timing, marshalling, and broadcasting systems will be conducted.

An online F1 Team Managers’ meeting is also set for Thursday, along with a Press Conference for the F1 drivers.

Friday’s start to F1 racing will include two 90-minute Practice sessions, scheduled to take place at 2 pm and 6 pm, respectively. A third 60-minute Practice will be held Saturday (November 28) at 2 pm, to be followed by Qualifying at 5 pm. That will determine the grid positions for Sunday's (November 29) 57-lap night race, set for a 5.10 pm start under BIC’s bright floodlights.

This year’s Bahrain Grand Prix marks the 15th round of the 17-race 2020 F1 World Championship. It is the front-end of the Kingdom’s first-ever F1 double-header.

It will be followed on December 4 to 6 by the Rolex Sakhir Grand Prix, which will provide an all-new spectacle for motorsport fans around the world as racing will take place along BIC's 3.543km Outer Track, which will be used for a competitive event for the very first time as a completely different layout from this weekend’s Grand Prix circuit. The Sakhir Grand Prix will feature 87 laps, which is the highest lap count of the season.

Meanwhile, Pirelli has announced their tyre allocation for the two races at BIC. The top flight’s tyre suppliers have nominated the C2, C3 and the C4 tyres, which are the P Zero White hard, P Zero Yellow medium, and P Zero Red soft, respectively.

Pirelli said that this year’s tyres are a step softer than the ones used at the 2019 Bahrain Grand Prix. They will have to cope with some of the most abrasive asphalt of the season at BIC, and, in the case of the Sakhir Grand Prix, the highest average lap speeds of the year. Tyres in the middle of Pirelli’s range have therefore been selected to cope with this varied range of demands.

Bahrain’s F1 double-header will be taking place with all precautionary guidelines in place issued by the Ministry of Youth and Sports Affairs and the Ministry of Health.

Although both events will be closed to the general public, frontline health workers and first responders, along with members of their immediate families, have been invited to join.