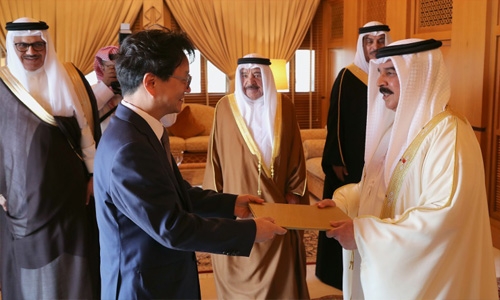 HM King Hamad exchanged welcome statements with the new ambassadors, and hailed the strong bilateral relations and steadily-growing ties binding the Kingdom of Bahrain and their friendly countries, wishing them every success in performing their diplomatic duties to consolidate the good relations of cooperation and friendship with Bahrain.

The two ambassadors conveyed to HM the King greetings and appreciation from their countries' leaders, who wished HM King Hamad abundant health and happiness and Bahrain and its people further progress and prosperity, lauding the solid relations between their countries and Bahrain at all levels.

The ceremony was attended by HM the King’s Personal Representative, HM the King Representative for Humanitarian Work and Youth Affairs, National Security Advisor and Chairman of the Supreme Council of Youth and Sport, the Royal Court Minister, Foreign Affairs Minister and Royal Protocols chief.

The two ambassadors arrived at the Al-Sakhir Palace separately, and were each welcomed by the Royal Protocols chief.