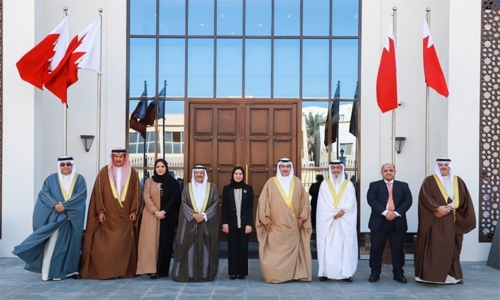 The speakers of GCC legislative councils extended thanks and appreciation to His Majesty King Hamad bin Isa Al Khalifa for his tireless efforts, and those of the Kingdom of Bahrain, to develop joint GCC action and open up broader horizons of cooperation and coordination among member countries.

Addressing the meeting, Zainal said that it is held in the midst of the exceptional circumstances GCC countries and the world are facing due to the spread of the novel coronavirus (COVID-19) pandemic and its impacts on various sectors, which, she stressed, requires stepping up cooperation, coordination and integration among GCC states and legislative institutions in all fields.

She pointed out that the meeting builds on the previously-taken steps, adding that it proves the joint keenness to overcome challenges and turn them into quality opportunities, investments and gains so as to cope with the latest developments, support GCC countries’ development efforts and consolidate the brotherly relations among GCC states, in line with the directives of GCC leaders and the aspirations of GCC peoples.

She emphasized that launching more common visions and joint action plans is the best means to achieve shared goals in the economic, social, security, scientific and health fields.

She stressed that safeguarding security and stability, combating all forms and manifestations of terrorism, especially that of extremist groups, rejecting external interference in GCC countries’ domestic affairs, and rallying together against the practices of the Iranian regime and its groups, as well as its financing and instigation of terrorism, will remain among the priorities of GCC joint parliamentary work.

The speaker also denounced the continuous attacks launched by the Iran-backed terrorist Houthi militias against Saudi Arabia, expressing Bahrain’s full-fledged support for Saudi Arabia, and backing of all the measures it deems necessary to safeguard the safety of its territories, citizens and residents.

She also confirmed the unified GCC stance in rejecting the continuous Iranian occupation of the three UAE islands and calling for an international solution to this fateful issue.

She praised the three leaders’ assertion of the firm stance on the need to set up an independent sovereign Palestinian state on the 1967 borders.

The GCC legislators discussed a number of topics on the meeting’s agenda, stressing their keenness to enhance cooperation and coordination among member states, and achieve the common GCC goals.

They sent a cable of congratulations to the Custodian of the Two Holy Mosques King Salman bin Abdulaziz Al-Saud on the outstanding success of the 15th G20 Leaders’ Summit, held under his chairmanship, and another to HM Sultan Haitham bin Tariq of Oman on his country’s 50th National Day.

They also expressed thanks and appreciation to the Representatives Council’s Speaker and affiliates of its Secretariat-General for the tremendous efforts they had made to ensure the successful organization of the meeting, especially in light of the exceptional circumstances created by the spread of the pandemic.