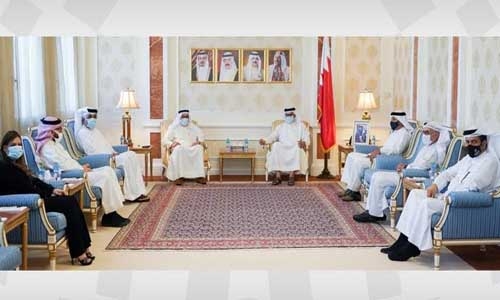 Dr Al Zayani expressed his appreciation to the editors-in-chief for their efforts, sincerity and dedication, as well as their contributions to promoting development. They are key to building community awareness and educating it through their accurate and credible information, the Minister pointed out. During the meeting, he briefed the editors-in-chief on the details of the talks that took place between Bahrain and the Israeli delegation this week.

The Minister indicated that it was a successful, fruitful and historic visit, during which the Joint Communiqué on the Establishment of Diplomatic, Peaceful and Friendly Relations between the Kingdom of Bahrain and Israel was signed. The visit also supports the efforts aiming towards reaching a safer, more stable and prosperous region, in accordance with the vision of His Majesty King Hamad bin Isa Al Khalifa, which is based on the principle of promoting opportunities for peace, stability and prosperity in the Middle East, and spreading the culture of tolerance, coexistence and acceptance of others, he added.

The two countries also signed a number of memoranda of understanding in various fields, including political, diplomatic, trade and air services, noting that all these areas are directly related to the economic development process in the Kingdom. He added that joint taskforces have been formed between the two sides to discuss areas of bilateral co-operation and the mechanisms required to implement them, expressing his hope for a better relations with Israel and for their development in the future. The Minister affirmed that the agreements aim to build bridges between the Bahrain and Israel, and constitute an essential platform for exchanging expertise and information between the institutions of the two countries.

He added that they pave the way for opening trade exchange and benefitting from multiple investment opportunities, in a way that would meet the aspirations of the people of Bahrain for development and prosperity. For their part, the editors-in-chief expressed their pride in the continuous diplomatic achievements of Bahrain, stressing that the signing of the diplomatic agreements with Israel will have a great impact on achieving a better future for the people of the Kingdom, as well as the peoples of the region, through improving co-operation and joint coordination between the two countries at all levels.