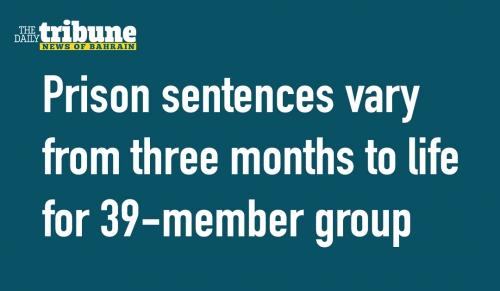 The First High Criminal Court yesterday issued its final verdict in a case involving a 39-member terrorist cell, who plotted to carry out acts of terror in the Kingdom. The court sentenced three members to life in prison, six to 10 years in jail, and six other members to seven years. Furthermore, three of the defendants were sentenced to five years in prison, while six of them got a one-year sentence.

As for the remaining 15 defendants, 11 of them were sentenced to six months behind bars and four were sentenced to three months. The 39 defendants were charged by the Public Prosecution back in 2018 of joining a terrorist group, recruiting members to serve terrorist purposes, and training to use explosives and how to detonate them using mobile phones.

The charges also included the illegal possession of explosives and other relative devices serving terrorist purposes, receiving and transporting funds that are allocated for terrorist activities, arson, and risking people’s lives and property.

Investigations showed that three of the defendants, who remain at large abroad, were responsible for the recruitment of the gang members and assembling them here in the Kingdom. The members received instructions to monitor a number of vital institutions in Bahrain, such as banks, schools, post offices, and sports clubs, in order to plant explosive devices in them during national celebrations of the Kingdom.