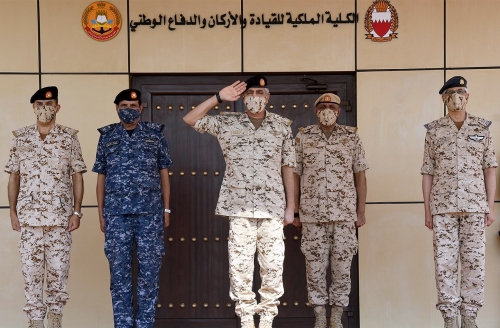 bahrain September 16, 2020
MANAMA
His Excellency Lieutenant General Dhiab bin Saqr Al Nuaimi, Chief of Staff, attended the opening ceremony of the Thirteenth Command and Staff Course at the Royal College of Command, Staff, and National Defense this morning, Wednesday, 16 September 2020.
The ceremony began with the recitation of fragrant verses from the Holy Quran, then the Commander of the Royal College of Command, Staff and National Defense gave a speech in which he welcomed the sponsor of the ceremony, and thanked the Chief of Staff for his favor in attending the opening of the thirteenth Joint Command and Staff Course, and urged the importance of this session and its role in qualifying and preparing Officers to work in their various leadership positions and military fields, which will contribute to raising their combat readiness and capabilities.