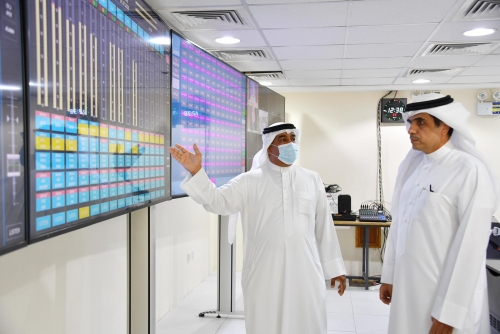 Information Affairs Minister, Ali bin Mohammed Al-Romaihi, yesterday inaugurated the first phase of the technical development project of Bahrain Radio studios. The project is part of the Information Ministry’s efforts to enhance media work and cope with the latest developments in the media, communication and information technology sector, in accordance with the Government Action Plan and the Bahrain Economic Vision 2030.

While inspecting the workflow at radio studios, along with the Information Ministry Undersecretary, Dr Abdulrahman Mohammed Bahar, and senior officials, the minister highly valued Bahrain Radio’s achievements over the past eight decades.

Al-Romaihi was briefed by Bahrain Radio Director, Younes Salman, about the main aspects of the technical development project in its first phase, as well as the modernisation of the digital equipment in broadcasting, work management and archiving in seven radio studios.

Salman also informed him about the inauguration of live audio-visual broadcasting on the Internet and TV, upgrading of the monitoring and control rooms, sound equipment and the production of HD programmmes.

The minister stressed that Bahrain Radio has, throughout its long history, embodied the real spirit of effective and national media, being the voice of the nation and its message of development, peace and progress.

He praised their dedication in carrying out their duties in cooperation with Team Bahrain to confront the unprecedented circumstances resulting from the outbreak of the novel coronavirus, citing their contributions to raising public awareness on COVID-19.

He also asserted that the ministry will continue its training programmes to prepare highly-qualified and trained national media and technical competencies in order to support its efforts to deliver a credible, trustworthy, influential and sustainable media message through various news and digital platforms, including social media.

He lauded the Bahraini media sector’s strides towards credibility, honesty, professionalism, efficiency and high quality. “The digital transformation and the introduction of new technologies in various aspects of radio work aims to make a qualitative shift to enhance competition with other media and to reach audiences through various modern communication devices.

It also enhances its active presence in the service of the country, the citizens and the residents, and keeps abreast of the progress of the Kingdom’s comprehensive development and civilizational achievements during the prosperous era of His Majesty King Hamad bin Isa Al Khalifa,” said Dr Bahar.

The Ministry Undersecretary added that “there is now a harmonious mix of promising youth, great talents and outstanding efforts to promote the leadership of Bahrain Radio.” The Assistant Undersecretary for radio and television, Abdullah Khalid Al Dossari, pointed out that today’s media is facing great challenges to keep pace with the speed of broadcasting news and information. The new technical equipment of the studios is a remarkable milestone in developing Bahrain Radio further, he added.