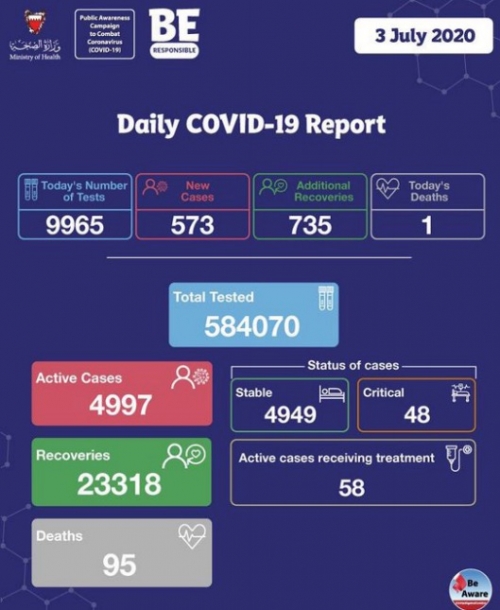 A 64-year-old Bahraini man is the latest casualty to the coronavirus (COVID-19) outbreak in the Kingdom, which has claimed 95 lives as of yesterday. Bahrain’s Ministry of Health announced the death on its twitter handle yesterday and offered condolences to the family of the deceased. No further details of the victim or his family were released.

As of yesterday, there are 58 active coronavirus patients in the Kingdom, receiving treatment at various facilities, of which 48 people are in a critical condition. Some 4,949 cases of the total 4,997 active cases are stable. The country has also reported curing 23,318 patients of their infections, after conducting 584,070 tests.

Health authorities conducted a total of 9,965 tests yesterday to detect 573 new cases and report 735 additional recoveries. The Kingdom reported its first case on 21 February 2020 when a school bus driver, who came from Iran via Dubai, tested positive to the virus.

The cases continued to spike rapidly afterwards resulting in the Kingdom imposing strict preventive measures, though it didn’t impose strict lockdown, unlike immediate neighbours. Mosques opening delayed Bahrain recently also delayed again the reopening of mosques for fear of a spike in cases.

Virus fighting robots Meanwhile, reports had also surfaced of the Kingdom acquiring new methods to keep public spaces disinfected. A new “coronavirus-fighting” robots designed by Fab lab Bahrain in collaboration with the Ministry’s of Youth and Sports Innovation centre reportedly will be used to work autonomously at public spaces.

The machine reportedly uses ultraviolet germicidal irradiation (UVGI) to disinfect commonly used areas. UVGI is a known disinfection method that utilises short-wavelength ultraviolet C (UV-C) light to kill or inactivate a range of microorganisms by disrupting their DNA or RNA. This leaves them unable to perform vital cellular functions.

However, since UV-C can irritate eyes and skin, the technology is only for use in unoccupied areas. 470,000 cases in GCC Meanwhile, the number of infections and deaths in the six-nation GCC group continues to increase and has now reached over 470,000. The number of deaths climbed to over 2,888. Globally, virus cases have risen to over 11,061,000 and death to above 525,500.

Amid the depressing numbers, the number of recoveries- now at over 6,199,300 -gives a ray of hope in the fight against the deadly pandemic. Saudi: 50 deaths in 24 hours In Saudi Arabia, the virus claimed another 50 lives yesterday bringing the number of deaths to 1,802. Cases now exceed 200,000 with the 4,193 new patients joining the tally.

The total number of recoveries in the kingdom increased to 140,614. To tide over the economic shock sparked by the crisis, Saudi Arabia’s King Salman bin Abdulaziz Al Saud yesterday issued a decree to extend several government initiatives for an additional period.

According to SPA, the extended initiatives focus on supporting Saudi employees, suspending imposition of fines and postponing the payment of some government services fees. This announcement follows the Kingdom’s decision to triple VAT from 5 per cent to 15pc. UAE cases reach 50,000 In UAE, the total number of cases is close to touching the 50,000 mark, with the death toll reaching 317.

The number of recoveries in the Kingdom is 38,994 and active cases 19,488. There is one critical patient in the Kingdom that has conducted 3,500,000 tests. 1,374 new cases in Oman Oman reported 1,374 new cases yesterday taking its overall infection to 43,929. Oman’s ministry of health also reported five new deaths, increasing the fatalities there to 193.

Overall recoveries from the deadly virus there have reached 26,169, which an increase of 851 cases in the past 24 hours. 813 cases in Kuwait In Kuwait also the situation of virus continues to remain more or less the same with its adding another 813 cases and one more death, yesterday.

Overall infections in the country now reached 48,672 and death toll 360. Kuwait, meanwhile, started the second phase of restoring normal life, which will last for three weeks. In this phase, the public and private sector establishments will resume work albeit with 30 pc capacity.

Works will also begin in shopping malls, financial sector, construction sector, retail shops and pick-up from restaurants and cafes. Qatar reported 756 new cases raising the total number of patients there to 98,653. With three more deaths, total death toll there rose to 121. Recoveries increased by 1,986 in the past 24 hours to reach 88,583 in total.