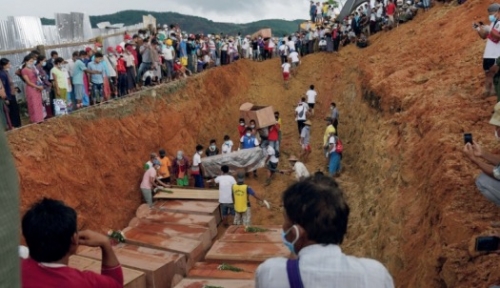 Dozens of jade miners were buried yesterday in a mass grave after a landslide in northern Myanmar killed over 170, most of them migrant workers seeking their fortune in treacherous open-cast mines near the China border.

Women wept by the open plywood caskets, some marked with just a name, a few with a solitary photo, before the bodies were carried into a huge grave gouged from the red earth by a mechanical digger near the scene of the landslide. It was the worst accident in memory to befall Myanmar’s notoriously dangerous jade mines.

The tragedy occurred on Thursday when a hillside collapsed in heavy monsoon rains, sending a deluge of smothering mud over the workers who were scouring the land for fragments of jade. “The search and rescue missions continued today... 172 bodies were found by midday,” the Myanmar Fire Services Department said in a Facebook post, raising the overnight toll by 10.

They join scores killed each year in Hpakant, an area is close to the Chinese border in Kachin state, where billions of dollars of the precious stone is believed to be scoured each year from bare hillsides by poor migrant workers seeking to strike it rich. As photos of the dead circulated on social media Facebook users began to identify workers hundreds of miles from home, leaving moving tributes to friends and family members.