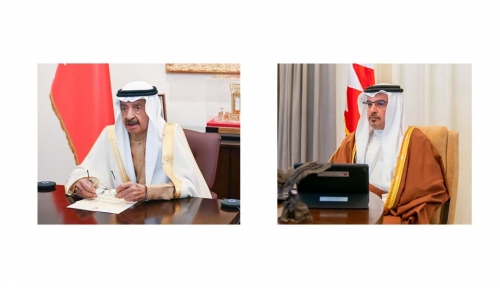 HRH the Prime Minister added that the instructions must particularly be carried out in locations where it is currently not possible to implement housing projects. In line with this, the Housing Ministry was requested to prepare a list of the pending demands, and to include them within the beneficiaries of the new and future housing projects.

In this regard, the Minister of Works, Municipalities Affairs and Urban Planning reviewed the Ministry’s plan to address pollution at Tubli Bay caused by the Tubli Wastewater Treatment Plant by implementing the second phase of the Hybrid Activated Sludge (Hybacs) project to stop the flow of the secondary treatment wastewater to the bay.

The plan also includes the implementation of three projects to expand the water canals of Tubli Bay in Ma’ameer to increase water movement and the self-cleaning process. The first is to modify the northern Ma’ameer canal crossing under the Shaikh Jaber Al Ahmad Street, while the second is to modify the sea bridge south of the Ma’ameer Canal (Bapco Bridge).

As for the third, it consists of the expansion and drilling of the Southern Ma’ameer Canal, the Works Minister said, adding that the Ministry will rely on international expertise to clean the bay from the existing pollutants. Specifications of labour accommodation discussed The Cabinet discussed the launch of a new mechanism to implement the provisions of the ministerial edict on the requirements and specifications of labour accommodation.

The mechanism will grant the Ministry of Labour and Social Development more powers to ensure commitment to the labour camp specifications. The ministerial committee in charge of studying the measures to curb the spread of the coronavirus (COVID-19) among expatriate workers was requested to study a memorandum presented by the Labour Ministry in this regard, and to submit its visions to the Government Executive Committee.

Measures to further protect national industries, products endorsed The session agreed to strengthen efforts to support national industries and protect their products from harmful practices in international trade, such as dumping and material damage by flooding the market with similar products.

In this regard, the Cabinet decided to implement the provisions of the Unified Law (System) on Anti-Dumping, Countervailing and Preventive Measures of the GCC countries and its executive by-law, as the best means to protect the national industries, as highlighted in a memorandum submitted by the Industry, Commerce and Tourism Minister.

The Ministerial Committee for Legal and Legislative Affairs was requested to take the necessary procedures to protect national industries and their products. Also during the Cabinet session, amending laws to pave the way for settling disputes related to athletes, clubs’ technical and administrative staff, and sports entities was discussed, to ensure that they are consistent with the Olympic Charter and international football laws; while the Cabinet reiterated the Kingdom’s support for brotherly Egypt, under the leadership of President Abdel Fattah El-Sisi, and backing of all the measures it takes to defend its national security and protect its stability, in the midst on the on-going situation and events at its western borders.