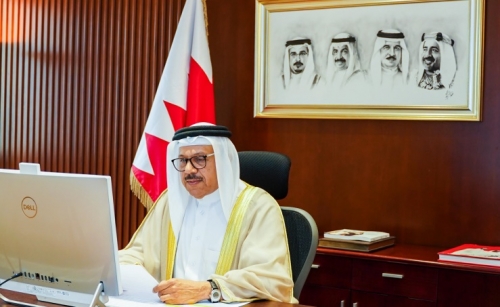 Minister of Foreign Affairs Dr. Abdullatif bin Rashid Al Zayani participated yesterday in the virtual Donors Conference for Yemen 2020, which was hosted by the brotherly Kingdom of Saudi Arabia in partnership with the UN Office for the Coordination of Humanitarian Affairs (OCHA).

The conference was also attended by a number of foreign ministers, senior officials and representatives of countries and specialised international organisations. Addressing the conference, Dr. Al Zayani underlined Bahrain’s appreciation and support for the ongoing efforts of the UN to establish peace and security in Yemen, highlighting the call of secretary-general Guterres for a ceasefire so as to dedicate all international efforts to combat the coronavirus.

That call received an immediate response from the Arab Coalition to Support Legitimacy in Yemen, which declared a comprehensive ceasefire.

He added that the initiative did not receive any response from the Houthis; rather, they continued their violations and breached the ceasefire and refused to cooperate with international humanitarian efforts to confront the spread of the coronavirus, despite the seriousness of the health situation and the weak health infrastructure in Yemen, which require urgent help from the international community.

The Foreign Minister also reaffirmed Bahrain’s support for the efforts of the Special Envoy for Yemen Martin Griffiths, and the importance of a political solution to the crisis in Yemen.