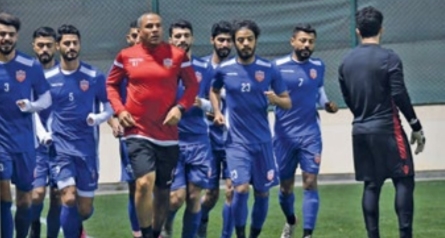 Bahrain’s men’s national football team have kicked off their local training for their upcoming joint-qualifier next month against Cambodia, for the Fifa World Cup 2022 and the AFC Asian Cup 2023.

They are also preparing for a pair of international friendly matches in March. The practices are being held at the Bahrain Football Association pitches in Riffa under the supervision of national team head coach Helio Sousa. The Portuguese tactician has selected a squad of 35 players to take part in the practice sessions, with many being new call-ups.

Bahrain are scheduled to take on their Cambodian counterparts on March 26 in their next qualifier, while their friendly games are against Malaysia on March 21 and against New Zealand on March 30.

Bahrain are currently in second place in qualifying Group C with nine points from five matches. Iraq are currently atop the table with 11 points. Iran are third with six points but have a game in hand, while Hong Kong are fourth on five points and Cambodia fifth with one.