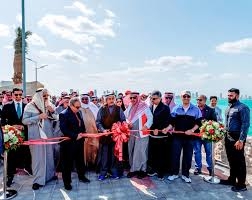 Deputy Prime Minister Shaikh Khalid bin Abdulla Al Khalifa, the Chairman of the Ministerial Committee for Development and Infrastructure Projects, has emphasised keenness on providing an infrastructure guaranteeing a secure and healthy environment for citizens and encouraging them to take up sport as a lifestyle.

The Deputy Premier was speaking as he yesterday inaugurated Busaiteen Beach Walkway in conjunction with the Kingdom’s celebration of Bahrain Sports Day. He said the occasion is considered as an opportunity to remind people of the importance of sport for the health. He stressed the great importance accorded by the leadership to this sector, pointing out that the Cabinet’s decision to allocate a half work day on February 11 to enable public sector employees to take part in various sporting activities underlines keenness to boost the role of sport as a culture. It also reflects the government’s commitment to providing services and programmes aimed at promoting people’s health.

The walkway, inaugurated by the Deputy Prime Minister today, is considered as one of the strategic projects carried out by the Ministry of Works, Municipality Affairs and Urban Planning. The inauguration took place in the presence of Minister of Works, Municipality Affairs and Urban Planning Essam Khalaf, Electricity and Water Affairs Minister Wael Al Mubarak, senior officials, heads and members of municipal councils, citizens from Muharraq and invitees.

The Deputy Premier expressed respect to Representative of His Majesty the King for Charity Work and Youth Affairs, National Security Advisor and Chairman of the Supreme Council for Youth and Sport (SCYS) HH Shaikh Nasser bin Hamad Al Khalifa for his keenness to develop the youth and sport sector which brought about remarkable achievements and enabled Bahraini athletes to win gold in many competitions.

The Deputy Prime Minister also praised close follow-up of SCYS Deputy Chairman and President of Bahrain Olympic Committee (BOC) HH Shaikh Khalid bin Hamad Al Khalifa, stressing his strategic directives to upgrade the two vital sectors. He underlined keenness of the ministerial committee to follow up on the implementation of the royal directives during the inauguration of the second session of the fifth legislative term of the Shura and Representatives Councils concerning the implementation of more climate-improving and agricultural surfaces projects.

The Deputy Premier commended the efforts of the Works, Municipality Affairs and Urban Planning Ministry to carry out the walkway project, which uses clean and renewable energy, comprises 80 fitness devices and includes many services and recreational facilities. The BD 2 million project extends over an area of 2 km and will include a public square, green spaces, family outlets, restaurants and other facilities, including a car park with 400-car capacity. Once it becomes fully operational, the project will contribute to promoting internal tourism and providing a new outlet for Bahraini families.