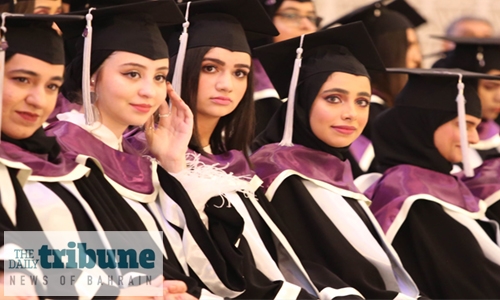 Bahrain is among the economies that improved most globally in gender equality, according to a new World Bank report, thanks to laws improving the protection of women at workplace and introducing criminal penalties for sexual harassment.

The report “Women, Business and the Law 2020” which tracks legal equality between men and women in 190 economies also hails the Kingdom for introducing reforms allowing women to be head of households.

The 10 economies that improved the most were Bahrain, Saudi Arabia, the United Arab Emirates, Nepal, South Sudan, São Tomé and Príncipe, the Democratic Republic of Congo, Djibouti, Jordan and Tunisia. Each of the top improvers saw a score increase in at least two Women, Business and the Law indicators.

The World Bank project tracks how the law affects women at various stages in their lives and explores the relationship between women’s empowerment and economic outcomes. The indicators chosen are Mobility, Workplace, Pay, Marriage, Parenthood, Entrepreneurship, Assets, and Pension.

Bahrain recorded an 8.8 point progress since 2017 to reach a score of 46.3 points out of 100 points in improving gender equality. In mobility, Bahrain, which falls in the high-income group, recorded a score of 50 mainly for allowing women to apply for passport and travel outside the country in the same way as a man.

Also bettering Bahrain’s score was provisions on sexual harassment in employment and criminal penalties for perpetrators. The reforms, World Bank says, have brought positive changes to the Kingdom as research shows clearly that reforms and policies that empower women boost economic growth.

“When women can move more freely, work outside the home and manage assets, they’re more likely to join the workforce and strengthen the economy.”

The report points out that women here are allowed to work in the same fields as men in several industries including Agriculture, water and transportation. There are also zero restrictions in the Kingdom for women in jobs deemed arduous.

Further, Labour laws which allow a maternity leave of 60 to 75 days for women along with paid leave for fathers also prohibits the dismissal of pregnant workers. 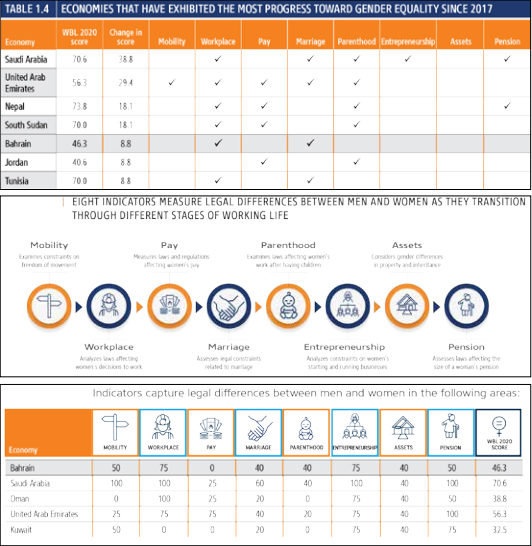 Head of households The report highlights the Kingdom’s reforms allowing women to be “head of household” or “head of the family” in the same way as men as a positive change.

Bahraini Supreme Council for Women formed in 2001 recently adopted a second National Plan for the Advancement of Bahraini Women for 2013–2022, which focuses not only on supporting women’s entrepreneurship, career opportunities, and financial independence, but also on enhancing their physical and psychological well-being and protection from domestic violence.

The council earlier commissioned a study on violence against women in Bahraini society that included data on workplace sexual harassment.

As Bahrain’s labour minister explains, the Kingdom introduced amendments to the labour law banning sexual harassment and discrimination in the workplace to bring national legislation in line with international standards.

The report also highlights several reforms in Bahrain’s entrepreneurship sector where women are allowed to sign a contract, register a business and open a bank account in the same way as a man.

Among other reforms identified by the report, Bahrain allows men and women equal ownership rights to immovable property and grants spouses equal administrative authority over assets during the marriage.