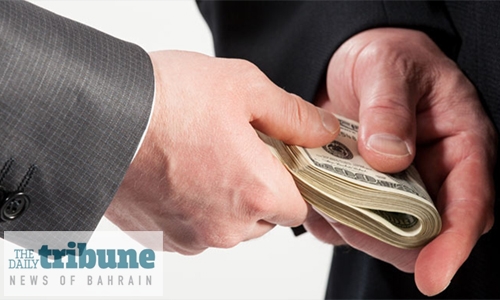 The Fourth High Criminal Court yesterday sentenced an employee in the Interior Ministry’s General Directorate of Civil Defence to 10 years in prison and fined BD2,000 for accepting a bribe.

The public prosecution has charged the suspect with requesting and accepting a BD2,000 bribe from a private company to provide a service. “The department was tipped off that the suspect asked for money from a company for a certain service, in which the investigation led to his arrest while taking the money,” an Interior Ministry statement said earlier.

Announcing the court order, Chief Prosecutor Mohammed Jamal Sultan said the court considered witness testimonies and investigation reports in its judgement. The defendant, arrested redhanded while receiving the bribe, was remanded in detention since October 31 last year, which was confirmed by the Interior ministry.