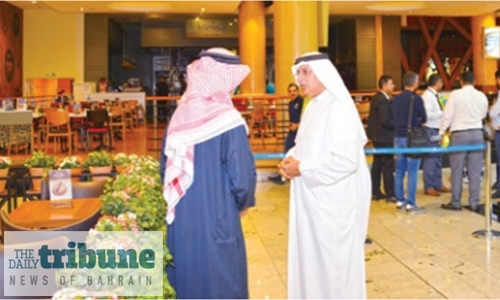 Panicked visitors were evacuated as a precautionary measure after a fire broke out at City Centre building in Seef at around 10:45 am yesterday. Teams of Civil Defence instantly rushed to the site and extinguished the fire. Speaking to Tribune, Faabi H V, who was at one of the movies at the mall when fire broke out, said they were evacuated within no time.

“We initially panicked. But within a few minutes we realised that things were brought under control,” she added. Industry, Commerce and Tourism Minister, Zayed Al Zayani, yesterday paid an inspection visit to the mishap site, where he was assured about the normal flow of work after the success to put out the fire that broke out from the chimney of a restaurant.

The minister was informed that work is back to normal at the mall, and that the restaurant was not damaged, except for its chimney. Mr Al Zayani valued highly the Civil Defence’s readiness and success in extinguishing the fire in no more than 55 minutes.

He also highlighted the precautionary measures taken by the mall’s management to address the situation, which, he said, contributed to the return of the commercial movement in the mall quickly and smoothly.

The minister also assured the visitors that everything is back to normal at the mall.

Kingdom set to affirm its position ‘as regional hub of expos, events’