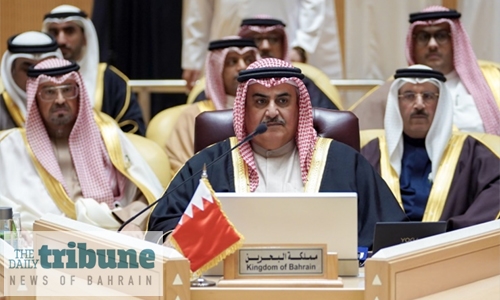 Foreign ministers from all over the Gulf Cooperation Council nations converged on Riyadh yesterday for a preparatory meeting of the 40th GCC summit which would discuss today the security situations and their impact on regional security and stability. Minister of Foreign Affairs, Shaikh Khalid bin Ahmed bin Mohammed Al Khalifa represented Bahrain at the 145th edition of the ministerial preparatory meeting for the 40th Supreme Summit.

The meeting, ahead of today’s discussions by the heads of the states, was attended by foreign ministers from Saudi Arabia, the UAE, Kuwait, Qatar, and Oman. Bahrain’s participation in the summit follows an invitation by the Custodian of the Two Holy Mosques King Salman bin Abdulaziz Al Saud of Saudi Arabia. The invitation was delivered to HM the King by Secretary-General of the GCC, Abdul Latif bin Rashid Al Zayani, during a meeting in Manama.

Yesterday, upon arrival in Riyadh, Shaikh Khalid was received by Minister of Foreign Affairs of the Kingdom of Saudi Arabia, Prince Faisal bin Farhan bin Abdullah Al Saud, as well as Al Zayani. Discussions at the meeting were on draft resolutions and recommendations to strengthen the mechanisms of joint Gulf action by ministerial committees to their Majesties, Excellencies and the leaders of the GCC States.

GCC Secretary-General has earlier expressed his confidence that the summit would result in constructive decisions that will boost the Gulf countries’ unity. “There are indications that the chapter of disagreement between brothers will be closed,” Kuwaiti Deputy Foreign Minister, Khalid Al Jarallah, told Kuwaiti media.

UAE Minister of State for Foreign Affairs Anwar Gargash said the Emirates looks forward to the summit “with optimism and hope”, reported The Arab Weekly. Gargash tweeted that his country is looking forward to the Riyadh summit “It is the summit that derives its importance from the weight and strategic importance of the region and its venue.”

“We have a firm belief in the Gulf and Arab role of the sisterly Kingdom of Saudi Arabia. So is our commitment to the success of the march of the Gulf Cooperation Council at the time of disintegration and anxiety,” he added. Gargash expressed the United Arab Emirates’ commitment to Gulf cooperation in dealing with imperative issues in the region.

“The UAE’s commitment to the Gulf institutional bloc is rooted in the depth of its keenness on the stability and prosperity of the region,” he tweeted. Kuwait’s state news agency KUNA said Amir Sheikh Sabah Al Ahmad Al Jaber Al Sabah has departed to Saudi Arabia for the Summit.