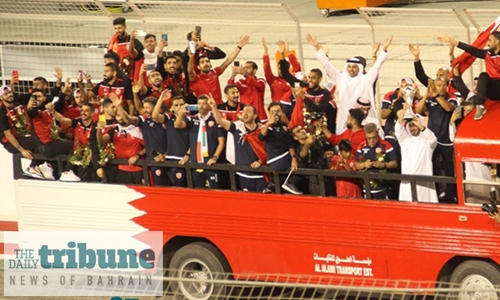 Bahrain came together as one yesterday as the Kingdom welcomed back the national football team who on Sunday night were crowned champions of the 24th Arabian Gulf Cup in Doha. Tens of thousands turned up for the welcome parade, which started from Bahrain International Airport, passed through Manama and ended at Bahrain International Circuit (BIC) in Sakhir, where a stunning ceremony took place.

The Bahrainis were welcomed upon touching down in the country by officials, led by His Highness Shaikh Khalid bin Hamad Al Khalifa, First Deputy Chairman of the Supreme Council of Youth and Sports and President of the Bahrain Olympic Committee. Then, with Shaikh Khalid at the forefront, they boarded an open-top bus that travelled to BIC.

During their journey, they showed off the much-coveted trophy, with legions of adoring fans proudly saluting them and waving the red-andwhite serrated Bahraini flag. Many also joined the convoy by car en route to the circuit. At BIC, among those joining the celebrations were His Royal Highness Prince Salman bin Hamad Al Khalifa, Crown Prince, Deputy Supreme Commander and First Deputy Prime Minister; and His Majesty the King’s Representative for Charity Works and Youth Affairs, National Security Advisor and Supreme Council for Youth and Sports Chairman Shaikh Nasser bin Hamad Al Khalifa.

The festivities included music played by the police band, a traditional band and popular local artist Flipperachi, along with a brilliant fireworks display that lit up the night sky over the Sakhir desert. The fans in attendance almost filled up BIC’s 10,500-capacity Main Grandstand, and the team interacted with their supporters from the track. It was a spectacular ceremony that was worthy of the occasion.

On Sunday, Bahrain won the eight-team Gulf competition after it beat Saudi Arabia 1-0 in a tense final. To reach the title match, the Bahrainis scored victories over football powerhouses Kuwait and Iraq. The stunning Bahraini prowess has been richly praised by all sports specialists and commentators.