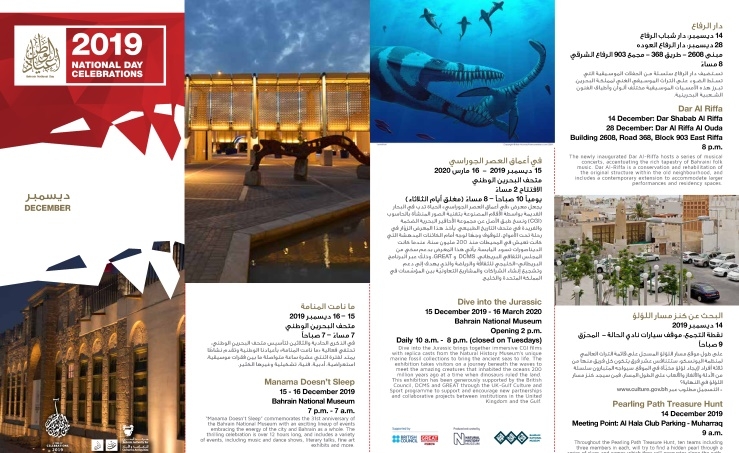 Bahrain is shaping up for a month of magical celebrations as the Kingdom proudly marks its national days.

The Bahrain Authority for Culture and Antiquities (BACA) has put together a rich programme for cultural celebrations across the Kingdom.

The newly inaugurated Dar Al-Riffa hosts a series of musical concerts, accentuating the rich tapestry of Bahraini folk music. Dar Al-Riffa is a conservation and rehabilitation of the original structure within the old neighbourhood, and includes a contemporary extension to accommodate larger performances and residency spaces.

“Manama Doesn’t Sleep” commemorates the 31st anniversary of the Bahrain National Museum with an exciting lineup of events embracing the energy of the city and Bahrain as a whole. The thrilling celebration is over 12 hours long, and includes a variety of events, including music and dance shows, literary talks, fine art exhibits and more.

Dive into the Jurassic

Dive into the Jurassic brings together immersive CGI films with replica casts from the Natural History Museum’s unique marine fossil collections to bring the ancient seas to life. The exhibition takes visitors on a journey beneath the waves to meet the amazing creatures that inhabited the oceans 200 million years ago at a time when dinosaurs ruled the land. This exhibition has been generously supported by the British Council, DCMS and GREAT through the UK-Gulf Culture and Sport programme to support and encourage new partnerships and collaborative projects between institutions in the United Kingdom and the Gulf.

Throughout the Pearling Path Treasure Hunt, ten teams including three members in each, will try to find a hidden pearl through a series of clues and games which they will encounter along the path.

*Registration is required at www.culture.gov.bh

Bahrain, known as Dilmun, has been considered the world’s harbour, where people felt sheltered, protected, and right at home. The love of this island, the land of Gilgamesh, has brought people from all over together, turning into a land of peace and coexistence.

This musical performance will take the audience on a reminiscent journey throughout the stages of Bahrain’s history, its origins, people and deeply-rooted history, up until the rule of His Majesty the King’s prosperous leadership.

Artist in a School Exhibition

Artist in a School exhibition will feature a number of talented students from four public schools in the Kingdom of Bahrain, under the initiative of the Bahrain Authority for Culture and Antiquities, and in cooperation with the Ministry of Education.

Throughout the efforts and dedication of four accomplished Bahraini artists, Dr. Mayasa Al Suwaidi, Jamal Abdulrahim, Areej Rajab and Mahmood AlShargawi, these artists have managed to embed a sense of quality and sophisticated cultural creativity to the art curricula of Bahrain’s public schools. This initiative has been implemented following a number of successful global examples, and managed to incorporate arts and culture in the process of teaching and learning, transforming our society into an educated, informed, creative and tolerant environment.

This workshop aims to celebrate the Arabic language and the achievements made by Arabic writers and linguists by incorporating visual art techniques into the formation of the Arabic lettering. The use of different mediums such as paper, wood, fabrics and paint will enable participants to add different textures and dimensions to traditional calligraphy.

On Martyr’s Day, artist Hala Mohammed Al Khalifa will host a workshop for children inspired by jasmine flowers, a longtime symbol for hope.

A Night of Arabic Classic Films: by Ezzel

“Among the Ruins” is a classic Egyptian film starring Faten Hamama and Emad Hamdy. The plot follows Mona, a university student, who falls in love with her professor Mahmoud, who is also a gifted writer. Mahmoud proposes to Mona, but her mother refuses his proposal and marries her to another man, resulting in her leaving Egypt. Years later after she returns to Egypt, Mona visits Mahmoud in the hospital. Mahmoud expresses his love for Mona as he lies on his deathbed.

The annual celebration of World Arabic Language Day at the Arab Regional Centre for World Heritage. This year’s lecture revolves around the topic “Arabic Language and Science”.

A Tribute to Great Italian Opera

In collaboration with the Embassy of Italy in the Kingdom of Bahrain, the internationally renowned music Academy “Accademia Chigiana” will present an authentic Italian musical evening from the great figures of Italian opera who made a mark in opera history. The five great figures of Italian opera between the nineteenth and twentieth centuries are adequately represented: Rossini, Bellini, Donizetti, Verdi, Puccini, plus Leoncavallo, a historical exponent of Italy’s Verismo. Bringing together tunes of melancholy, elegant comedy and dramatic hues, the evening will also serve as a tribute to the frivolous world of operetta.

In celebration of Bahraini Women’s Day, the Bahrain Authority for Culture and Antiquities presents “Oud Night”, starring Oud player Saad Mahmood Jawad, accompanied by all-female group, “Hunna”. “Hunna” is an international project established in the Kingdom of Bahrain, created by Saad Mahmood Jawad, and includes the first all female group who solely specialize in playing the oud.

The story of Bahrain as told by its most renowned site: Qal’at Al Bahrain. The show is an interactive and moving audio visual experience which takes the audience through a guided journey from the present into the past, and back.

“Everything else she is, is a visual definition of what it means to be a successful Bahraini woman”

A photography pop up exhibition honoring the women of Bahrain, coinciding with Bahraini Women’s Day Celebrations. Selected artwork by Bahraini women artists from the Collection of the Bahrain National Museum will also be displayed.

The Treasures of Krakow Exhibition

“The Treasures of Krakow” recounts the tale of a city – the seat of Polish kings, former capital of the country, home to one of the oldest European universities, and magnet for poets, writers and artists. Krakow was one of the most important metropolises of the Medieval era, and became the first European urban ensemble to be inscribed on the UNESCO World Heritage List. This exhibition sheds light on the strong cultural ties and exchanges between the Kingdom of Bahrain and the Republic of Poland.

Culture & the City – The Case of Krakow

The lecture will present the strengths and potentials of the tangible and intangible heritage of Krakow, and introduce the municipal strategies that aim to balance the protection of monuments (revitalization projects) and development of contemporary art. The lecture will portray the different dimensions of cultural life in Krakow, in addition to examining the relations between cultural life and the city itself. In conclusion, the lecture will try to answer a provocative question: are cultural heritage related industries a burden or a capability for the city’s development, especially in the context of its impact on the quality of the citizens’ lives.

*This lecture will be conducted in English language.

My Nation.. My Story

A storytelling session which stimulates children’s creative imagination by telling a story about their nation, followed by an interactive activity where they get to express their love and belonging to their nation by drawing paintings of different scenes of stories in which they present themselves as the heroes. This event is held in cooperation with the “We All Read” society, and will be conducted in Arabic Language.

*Registration is required at www.culture.gov.bh

Nourish your soul with the fruits of Bahrain’s intangible heritage, and enjoy the live Bahraini musical performances of the Fijri tradition. This unique, mystical genre traces its roots back to the days of the island’s glorious pearling legacy.

The weekly activity “Five P.M. at Bab” in the heart of Bab AlBahrain, offers visitors in the area diverse cultural activities that represent the dynamics of the venue and its historical value, while targeting different age groups through the designated space, which is dedicated to practice creativity in its various forms.

Coinciding with the National Day celebrations, December Murals is an initiative that presents four murals in four different areas in Bahrain: Nabih Saleh, A’ali, Budayia and Manama. Through these initiatives, the artists transfer their signature works from the traditional media to permanent locations, where residents and visitors can enjoy them.

Under the Patronage of His Majesty King Hamad, the Bahrain Authority for Culture and Antiquities celebrates the legacy of the thinker Dr. Mohammed Jaber Al Ansari by commemorating his career and shedding light to his human, intellectual, political and literary experience.

A perfume and fine jewelry launch bringing together two Bahraini designers Noof Al Shekar and Zaina Khalid. Setting herself apart from the average market, Noof creates essential Perla fragrances to suit the needs of women of all ages. The scents she has incorporated into these fragrances are drawn from her past journeys, inspirations and emotions. Zaina creates unique jewelry that translates from comfortable daywear to enchanting evening pieces. Her jewelry’s effortless looks is what sets the bespoke designer collection apart from the mainstream.

Our Heritage on a Clay Pot Workshop

Participants will get the chance to celebrate the Kingdom of Bahrain’s National Day with the Enkiru Kids Club through an archaeological excavation workshop, followed by an activity of decorating clay pots with decoupage of Bahrain’s archaeological sites.