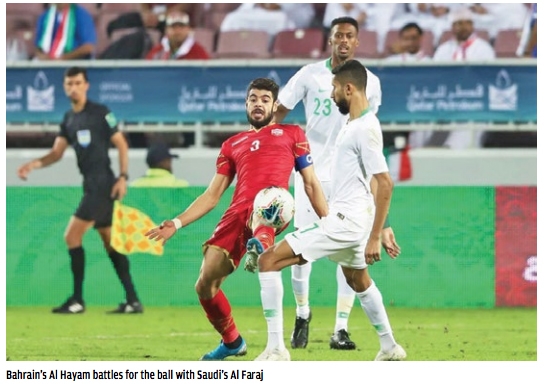 Bahrain suffered a major blow to their semi-final hopes in the 24th Arabian Gulf Cup in Doha, following a 0-2 defeat to Saudi Arabia last night in Group B of the tournament’s preliminary round. A goal on each side of halftime separated the two sides in the contest. Striker Abdulla Al Hamdan opened the Saudis’ account in the 29th minute with a brilliant strike from just outside of the box, and then defender Mohammed Al Khabrani supplied his team’s second two minutes before the hour with a well-placed header off a corner. The Bahrainis tried valiantly to fight back but as in their previous international matches had trouble scoring in open play.

They dropped to last place on their division table and now have a very slim shot of qualifying for the final four. Bahrain must beat Kuwait in their last game tomorrow and hope that Oman defeat Saudi in the other group encounter. Wins for both Bahrain and Saudi would form a two-team tie between Bahrain and Oman, with the tie-break being determined by superior goal-difference. A win for Bahrain and a draw between Oman and Saudi would force a tie-break between the Bahrainis and Saudis. Anything less than a victory for Bahrain would confirm their Gulf Cup exit. Saudi improved their chances of making it to the final four after taking their first win.

They now have three points and are third in Group B. Defending champions Oman went to four points after beating the Kuwaitis 2-1 in yesterday’s earlier Group B game. Despite the loss, Kuwait are second with three points from their victory in their opening game against the Saudis. Bahrain striker Thiago Augusto nearly put his team in front last night in the 26th minute with a well-hit left-footed shot that was parried away just enough by Saudi goalkeeper Fawaz Al Qarni. Saudi’s Al Hamdan then scored his team’s first goal just three minutes on. He was given too much space inches outside of the penalty area and he made Bahrain pay with a left-footed rocket that sailed past the outstretched arm of Bahrain goalkeeper Hamad Aldoseri. That was enough to give Saudi the advantage at the interval. In the second half, the Saudis continued from where they left off and were rewarded with their second goal in the 58th minute. Poor marking from Bahrain allowed Al Khabrani to head the ball directly into net off a corner-kick. The Saudis were in control of the match at this point and Bahrain grew increasingly careless. Al Hamdan nearly punished Bahrain once again after stealing the ball after some lazy passing from the Bahraini back line, but his shot in the 63rd minute hit the right post.

Al Doseri made a number of crucial saves to prevent Bahrain from conceding a third, including one in the 73rd minute when he dove to slap the ball away off the goal line following a shot by Saudi skipper Salman Al Faraj In the second minute of second-half stoppage time, Bahrain’s influential midfielder Sayed Dhiya Saeed lost a surefire chance for a consolation, which could prove key in a tie-break scenario. He was unmarked and had a shot just a few feet from goal, but he hit it poorly and the ball went well wide of its mark. Bahrain head coach Helio Sousa began the match with a starting 11 that included Aldoseri between the posts; Mohammed Adel, Ahmed Bughammar, Abdulla al Hazaa and Waleed Al Hayam in defence; Mohammed Hardan, Abdulwahab Almalood, Mohammed Abdulwahab, Mohammed Marhoon and Saeed in a five-man midfield; and Augusto as the lone striker. team number two battle team number three. The gold and bronze medal games will then take place on the championship’s final day on December 1.