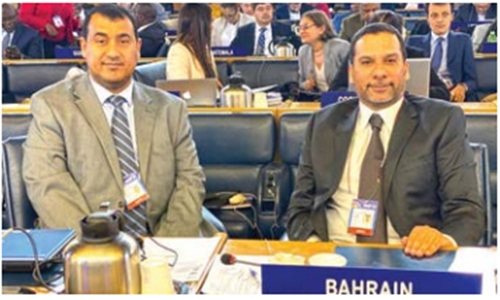 Chief Executive Officer of the Supreme Council for Environment (SCE), Dr Mohammed Mubarak bin Daina, led the Kingdom’s delegation to the High-Level Ministerial Segment of the 31st Meeting of the Parties to the Montreal Protocol on Substances that Deplete the Ozone Layer, held in Rome, Italy.

In his statement, Dr Bin Daina lauded the good stances of the Parties to the Montreal Protocol, especially those of the West Asia and the Pacific region for their endorsement of the Kingdom’s membership in the Executive Committee, which, he said, reflects the honourable role played the Bahraini negotiators over the past years in defending the common issues of the West Asian and Pacific countries on their behalf.

Dr Bin Daina pointed out that the Parties to the Montreal Protocol had discussed the main issues related to the policies that should be adopted to protect the Ozone Layer, noting that the agenda focused on the unexpected emissions of CFC-11, and ways to address them, especially after all countries have stopped producing or trading them since 2010.

The meeting also discussed the study on the 2021–2023 replenishment of the Multilateral Fund for the Implementation of the Montreal Protocol in, which is expected to adopt a budget of at least half a billion US dollars. Attending the event, Pope Francis praised the Protocol as a “model of international co-operation, not only in the area of environmental protection, but also that of the promotion of integral human development”.

The Montreal Protocol is an addendum to the Vienna Convention for the Protection of the Ozone Layer, which provides a framework for international reductions in the productions of certain chemicals that contribute to the destruction of the so-called “ozone layer” in the earth’s atmosphere.

As Pope Francis noted, this became “the first Convention of the United Nations system to gain universal endorsement on the part of the entire family of nations”. One hundred ninety-six states, as well as the European Union, have signed the agreement.