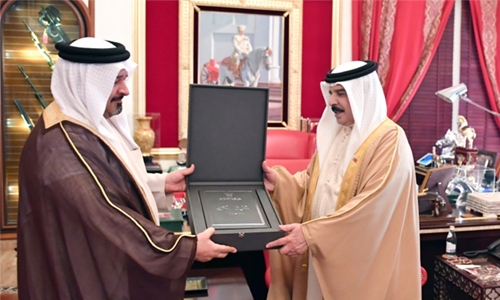 HM the King commended the efforts exerted by the NAO president and personnel, hailing their outstanding performance and achievements as part of a drive to protect public money and ensure the sound spending, considering highest standards of probity, professionalism and transparency marking NAO reports.

HM the King commended the NAO-led monitoring team in assuming its crucial role and protecting its independent work, which contributes to enhancing the performance of ministries and state institutions towards attaining the highest levels of productivity, competence and optimising the use of resources for the sake of public interest.

National Auditing Office (NAO) President Shaikh Ahmed bin Mohammed Al Khalifa said that he was honoured to submit the 16th NAO Report for the year 2018-2019 to HM the King as per article 19 of the law on the National Audit Office.  He said that the sixteenth annual report issued by the office, an entity which is financially and administratively independent from the legislative and executive branches of government and works professionally with the bodies under its control to enhance performance, ensure accountability and promote transparency.

He said that the report for the year 2018-2019 features substantive observations and recommendations which results from the financial and administrative monitoring. He underlined outstanding NAO strides since its inception, paying tribute to HM the King for his royal support. He said that he had been honoured to hear HM the King’s remarks and directives regarding the NAO recommendations.