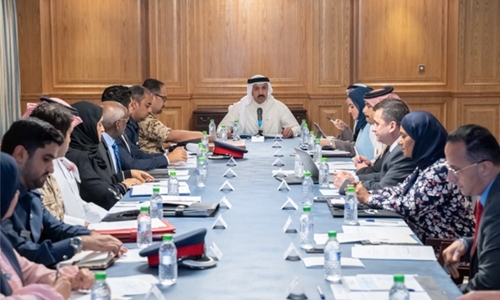 The National Committee for Follow-Up on the Kingdom of Bahrain’s Commitment to All Security Council Resolutions convened its fourth meeting at the Ministry of Foreign Affairs yesterday presided by the Ministry’s Undersecretary for International Affairs Dr Shaikh Abdulla bin Ahmed Al Khalifa, with the participation of members of the committee representing the relevant ministries and government bodies.

At the outset of the meeting, Dr Shaikh Abdulla thanked the members of the committee and their respective bodies on their active and distinguished participation in the “workshop to safeguard non-profit sector from terrorist abuse” which was held in the Kingdom between the 3rd-4th of September, in partnership with experts from the United Nations Office on Counter-Terrorism and the Middle East and North Africa Financial Action Task Force (MENAFATF), as well as representatives of 19 bodies with a total of 83 participants, including representatives of civil society organisations, banks and financial institutions.

The meeting reviewed the outcomes of the working groups emanating from the National Committee, and the efforts exerted in establishing integrated system related to the implementation of the UN Security Council resolutions in accordance with the expected standards and requirements. During the meeting, they also exchanged view on the mechanisms of completing the committee’s work plan for this year in line with the aspirations and programs of the relevant ministries and government agencies.

The undersecretary pointed out that the National Committee continues to exert efforts to follow-up the UN Security Council resolutions, namely combating terrorism. He added that the Committee works on enhancing coordination with the relevant bodies in the Kingdom, as well as taking all the necessary measures in this regard and in line with the partnership with the United Nations.