Beacon of tolerance | THE DAILY TRIBUNE | KINGDOM OF BAHRAIN 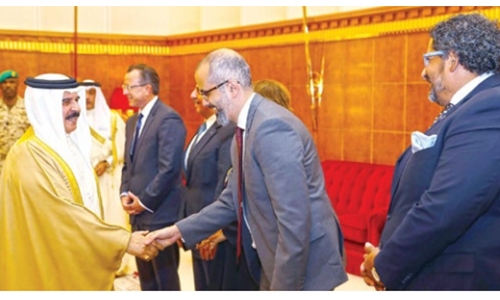 His Majesty King Hamad bin Isa Al Khalifa yesterday received, at Al Sakhir Palace, heads of delegations participating in the Government Forum to Combat Trafficking in Persons in the Middle East, organised by the National Committee to Combat Trafficking in Persons and the Labour Market Regulatory Authority (LMRA), in co-operation with the International Organisation for Migration and the United Nations Office on Drugs and Crime (UNDOC) in the GCC.

HM the King welcomed the guests of Bahrain and wished them success, taking pride in hosting this importance forum, in a first in the region, describing the event as first-hand opportunity to exchange expertise and practices in the field of combating trafficking in Persons.  HM the King hailed Bahrain’s Tier 1 ranking, for the second consecutive year, as per the US Department of State Trafficking in Persons (TiP) report, as the first country in the Middle East and North Africa.

His Majesty lauded the outstanding ranking, which, he said, reflects Bahrain’s commitment to international standards, participation in the international community’s drive to combat trafficking in persons and foster the culture of human rights. The King praised the landmark achievement as the fruit of dedicated work and joint co-ordination between the Foreign Ministry, the National Committee to Combat Trafficking in Persons and the Labour Market Regulatory Authority (LMRA).

His Majesty recognised all relevant institutions and competent authorities which adopted key initiatives and viable programmes aimed at turning the Kingdom as a global role model for combating trafficking in persons.  HM the King paid tribute to the people of Bahrain, who have been living, all along the Kingdom’s history, as closely-knit family, welcoming all visitors in the homeland as their friends, thus reflecting their genuine mettle and deep-rooted and long-standing traditions.

His Majesty lauded Bahrain’s respect for all people in their country without any discrimination, stressing their keenness on reaching out to all those living on Bahrain’s soil respectfully.  “Protecting dignity and security is an inalienable human right which is inherent in all religions and international laws,” His Majesty said, affirming that the Kingdom will always commit to its longstanding heritage that epitomises human values of justice and equality.

“Bahrain will remain a beacon of moderation, committed to building bridges with all countries in the world, regardless of cultures, religions or faiths,” HM the King said. The audience expressed deepest thanks and appreciation to HM the King for the warm welcomed and the success of the forum, hailing Bahrain’s Tier 1 ranking in the US Department of State Trafficking in Persons (TiP) Report, as the first country in the Middle East and North Africa.