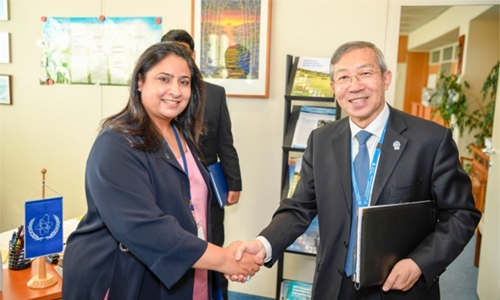 Bahrain yesterday expressed its interest in boosting cooperation with the International Atomic Energy Agency (IAEA) in harnessing the nuclear technology in the field of sustainable development, said a top official. The move, Dr Shaikha Rana bint Isa bin Daij Al Khalifa said, is in line with the Kingdom’s Economic Vision 2030 and the Sustainable Development Goals.

The Undersecretary of the Ministry of Foreign Affairs and Head of the National Committee on the Prohibition of the Development, Production, Stockpiling and Use of Chemical Weapons was meeting the Deputy Director-General and Head of the Department of Technical Cooperation, Dazhu Yang. The meeting was held on the sidelines of the 63rd session of the General Conference of the International Atomic Energy Agency in Vienna.

Dr Shaikha Rana commended the constructive cooperation between Bahrain and the IAEA, noting in this regard the signing of the Country Programme Framework (CPF) with the International Atomic Energy Agency (IAEA). Dazhu Yang affirmed that the IAEA is proud of its cooperation with Bahrain for securing a zone free of nuclear weapons and mass destruction. The Undersecretary also met with the Deputy Director-General and Head of the Department of Safeguards, Massimo Aparo.

She commended the significant role played by the Safeguards Department in verifying the compliance of states with the framework of the NPT. Dr Shaikha Rana affirmed Bahrain’s position that all parties should abide by this treaty, stressing the need for states to apply safeguards to avoid incidents that lead to disasters.