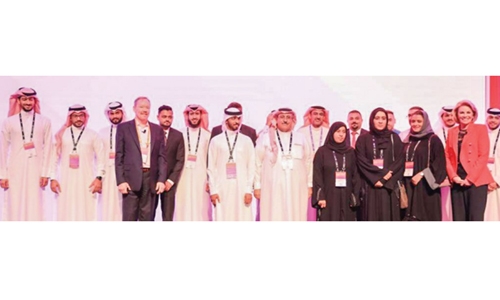 The five entities honoured were the Ministry of Education, National Oil and Gas Authority (NOGA), Polytechnic University, National Health Regulatory Authority (NHRA), and iGA. The ceremony was part of AWS Global Summit 2019, which was held yesterday. Mr AlQaed congratulated the employees for their efforts in completing the Amazon training courses, praising the active role played by these entities in adopting cloud computing in order to achieve the greatest possible use of the technology.

He expressed his sincere thanks to the Ministers and concerned officials for their guidance in supporting this direction by the government, which aims to strengthen the performance of the IT sector in the Kingdom of Bahrain. He praised the co-operation between iGA and Tamkeen in implementing a range of joint programs through the Professional Certifications Scheme, which includes many cloud computing certifications.

He urged other government entities to adopt the CloudFirst policy in line with the advanced and innovative approach being taken in the region, especially since the Kingdom has also launched, in co-operation with AWS, the first Cloud Data Centre of its kind in the Middle East. The Centre will enhance the readiness of the ICT sector while creating new opportunities and paving the way for further productivity growth at a lower cost.

In 2017, iGA launched the national project across all government entities, with the aim of migrating the IT infrastructure to cloud computing systems, making this technology the preferred choice for the operation and management of government organisations’ systems, saving effort, time, and expenses.