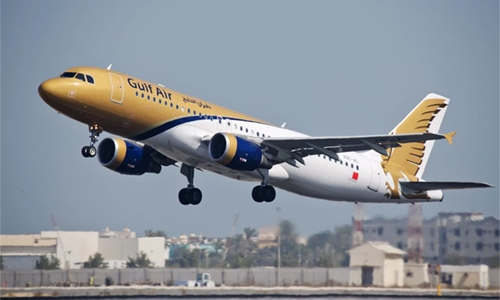 Gulf Air, the national carrier of the Kingdom of Bahrain, recently promoted five long service Bahraini staff to become Cabin Service Managers – a position that is ranked the highest amongst hospitality services in the air. The five employees have progressed throughout their career from Flight Attendants to Cabin Senior and lately to Cabin Service Managers, marking their 25-year service for the national carrier.

The new position will entitle the group to be in charge of all hospitality operations of the flight, managing the entire team of flight attendants with the ultimate goal of total customer satisfaction for the passengers. A celebratory event took place at the airline’s headquarters where Gulf Air’s Deputy Chief Executive Officer Captain Waleed Al Alawi said: “Gulf Air takes pride in being a corporate leader in Bahrainisation in the Kingdom of Bahrain. With 100 per cent of our male flight attendants being Bahrainis, we definitely lead the way amongst the regional carriers.”

He also added: “We are proud of our local, specialised and professional resources who are serving our international customer base with pure Bahraini hospitality, a quality that is associated with the Kingdom of Bahrain since the ancient times when we were a central trading point between the East and West”. On this occasion, the newly appointed Cabin Service Manager Abdulmajeed Mohamed said: “This is an important day in my career in Gulf Air.

I spent 25 years flying with Gulf Air and today I am proud to manage the hospitality operations of my flights and share my experience with the new joining crew.” Also commenting during the event Mr. Sami Al Qayed said: “This feels great to be amongst this group of Bahraini Cabin Service Managers being promoted on the same day. We thank the airline and its management for giving us this opportunity to show customers true and genuine hospitality from the heart.”

The airline is unique comparing to all its neighbouring airlines as it employs young Bahraini males as flight attendants and have reached total Bahrainisation in this big area of the business, Gulf Air said in a statement issued. Gulf Air is committed to invest in its Bahraini workforce and their career development and as such, it continues to provide opportunities for Bahraini nationals to take over senior positions in the company, the statement added.

With 90pc of employees that are based at the headquarters in Muharraq being Bahraini along with nearly 70pc of its pilots, Gulf Air is a leader in the Bahrainisation programme in the Kingdom as it provides the opportunity for local talents and experienced personnel to work in its various areas of the airline’s business.