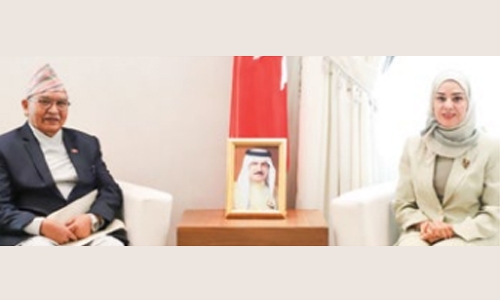 While receiving the Nepalese Ambassador to Bahrain, Padam Sundas yesterday, the speaker noted that the relevant Asian legislative councils and parliaments are required to unify and co-ordinate their efforts aimed at achieving the aspirations of Asian countries and peoples through supporting joint economic and investment projects and coordinating parliamentary stances at international gatherings through the Asian Parliamentary Assembly.

She also discussed with the envoy ways to enhance bilateral parliamentary relations and activate joint parliamentary friendship committees, lauding the distinguished relations between the two countries and their friendly peoples. Ambassador Padam Sundas expressed his country’s pride in its strong relations with Bahrain, and its keenness to bolster co-operation with it. He also lauded the progress boom witnessed by the kingdom in various fields.