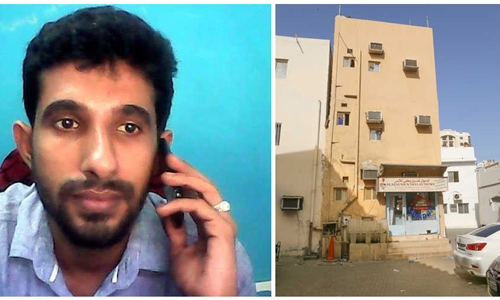 A Sudanese national was sentenced to death yesterday by the First High Criminal Court for murdering an Indian national in the Capital Governorate last year. The court also ordered to imprison him for five years. The defendant had earlier confessed to killing the Indian victim, 31 years old Abdul Nahas, after seeing him “walking drunk on the road”. The gruesome killing was shocking as the 41-year-old tortured his victim, raped him and videotaped the process.

The Defence Attorney, Mohammed Bumtai, pleaded that his client isn’t guilty, as medical reports proved he isn’t mentally fit at the time when the crime took place, claiming that he wasn’t responsible for his actions. The details of the case show that the defendant had murdered the victim after encountering him on a public road at dawn. He also sodomised him while he was dying, according to medical reports.

The report stated that the victim was strangled to death after he was beaten up. The defendant told the prosecutors earlier that he killed the victim out of his “love for Bahrain” and refusal to see drunk men walking publicly. He said that he had come to Bahrain in search of a job and that he was a holder of a medical engineering certificate. “I was looking for a job and my sister works as a doctor at a hospital here. Her employers sponsored me for some time, but I couldn’t find a job,” the defendant said in his statements.

“I didn’t have any relationship with the victim. I saw him on the day of the incident at dawn and he was drunk. I was talking with my Bahraini friends on the road and I stopped him. “I asked him about his religion because I love Bahrain and I don’t like to see drunk people walking in public. I ordered him to show me his identity card, but he ran away,” he explained. The man claimed that he enquired in the neighbourhood and learnt where the victim lived. “I went to his apartment because I wanted to advise him. “He opened the door for me and I entered the apartment.

He locked the door and started attacking me. I responded in self-defence,” he alleged. Court files showed that the defendant then proceeded with torturing the victim and later killing him. To mislead investigators, he is said to have written slogans on the walls of the apartment with an intention to get people belonging to a certain sect indicted in the murder.

“I decided to pour chlorine on the body of the victim because I saw in movies that they were using chemicals to conceal the traces of crimes. “I also poured alcohol and powder all around the apartment. Before I left I wrote some slogans on the walls to mislead investigators,” he added.