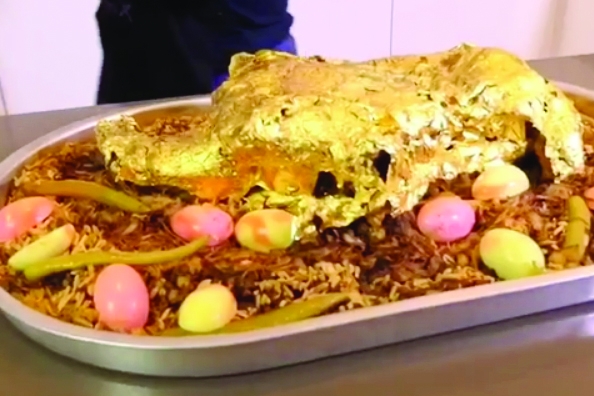 A Bahraini youngster has evoked mixed public reaction for making a lamb dish covered with gold. Young chef Yousif Zainal who describes himself as a ‘recipe developer’ went viral on social media after he prepared a unique dish, which consisted of 24k gold. The dish which he called ‘lamb covered with pure gold’ created a stark division among the social media users.

While many commended what they described to be his creativity and eye for art, others lamented the extravagance.  On his Instagram account Zainalkitchen he posted pictures of the dish along with a video of instructions on how to prepare it.  A small lamb of 10 kg was used for the preparation.

He listed bukhari rice, onions, garlic, coriander, cumin and black pepper as some of the other ingredients.  The post garnered hundreds of comments within minutes.

Some of the social media users called the dish unIslamic and unethically extravagant. “This is un-Islamic, it is either forbidden or discouraged, so it is better to delete this post and ask for forgiveness,” a user commented.