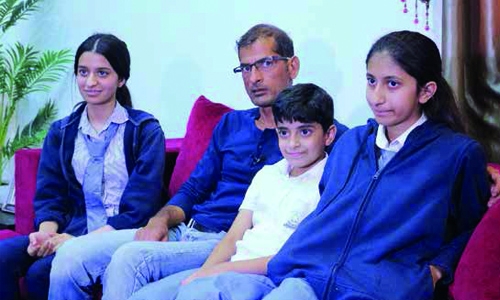 “My life flashed before my eyes. After the 11th hour in the middle of nowhere, I truly believed this was the end for me and I would never see my children again.”

These were the words of Yehya Al Khaja, who was rescued from the middle of the sea on Tuesday. He recalled the horrifying moments he witnessed surrounded by dark waters. The 45-year-old Bahraini diver was rescued in a heroic operation led by the Bahraini Coastguards in co-operation with scores of Bahraini seafarers and divers on the dawn of Tuesday.

The long-time sailor, also an amateur scuba diver, was saved more than 12 hours after being lost in the sea and swimming an approximate distance of 32km. Al Khaja explained in an interview with Tribune yesterday that he was dragged away by strong waves while he and two fellow divers were on an ordinary diving trip.

He drifted into the horizon away from his boat anchored at Hair Shtaya Marine Reserve. The reserve located around 25km off the northern coast of Bahrain is one of the most favourite diving destinations in the Arabian Gulf due to its captivating underwater scenes and the various sea creatures.

While recalling the frightening night he spent lost in the sea with all of his heavy diving gear on him, Mr Al Khaja said, “We were casually diving near Hair Shtaya, after sailing for 51km from Al Bandar resort. After my third dive, I was trying to swim 100 metres towards the boat. But the strong current suddenly pulled me to the east, away from the boat. My partner who was in the boat was busy assisting the other  guy out of water. I kept on yelling and shouting for help but both of them couldn’t hear me and the boat kept shrinking into the horizon.”

“These were the longest 12 hours of my life. I couldn’t see any land for more than ten hours. I wasn’t aware of my location. I was frightened, hungry and exhausted. I kept on praying with my three children. For a moment, I felt it’s the end for me,” Mr Al Khaja said.

The brave diver paused for a few seconds, wiped off his tears and continued, “I restored hope and energy when I saw a boat coming towards me from a distance. I kept on yelling and waving until they reached my location. The man in the boat asked my name, and when I replied he said all of Bahrain was searching for you for hours and we’re here to save you.

They pulled me out of the water and took me to the Coastguard base in Muharraq, where my family was waiting for me. They were in a terrible shape. I was speechless because of hunger and exhaustion. I was immediately given Intravenous Therapy.” When asked if he would dive again, Al Khaja’s eldest daughter Wasan, 16, sternly interrupted him before answering the question, saying, “Baba (dad), you’re not going to dive again and we will sell your boat.”

The tenth-grader said she, her mom, her 13-year-old sister Waad and seven-year-old brother Ibrahim were still completely not out of shock. “We thought we would never see him again and we lost him forever. God has answered our prayers.”

Al Khaja is a recently retired anti-narcotics cop who was awarded for his contribution in busting several offshore trafficking attempts in a span of 25 years of service. He was decorated with the Bravery Medal of the second degree by His Majesty King Hamad bin Isa Al Khalifa.

Illegal booze sale on the rise