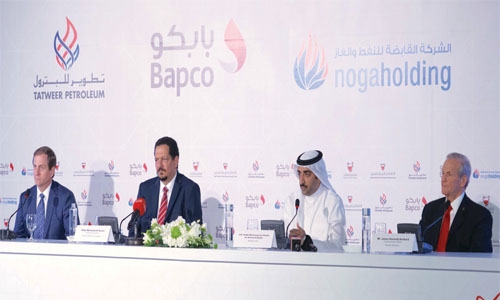 Manama : US company Halliburton will drill two wells this year in the offshore Khaleej Al Bahrain Basin to appraise how much of the oil contained underground is actually recoverable.

It’s not clear how much the field can produce or how much it will cost to develop, Shaikh Mohammed told reporters. International oil companies will be invited to join once there’s more data, he said.

The amount of oil and gas that can be recovered from hard-to-reach pockets in shale rocks under the sea is an expensive process.

“The oil will also be technically challenging and potentially high cost to develop,” the oil minister said.

Bahrain last year produced about 49,000 barrels a day of crude from its only wholly owned field, a figure it plans to double by 2020.

Tapping the shale formation will require hydraulic fracturing, commonly known as fracking, the minister said. This makes the development an “economic and technical” challenge, Sadad al-Husseini, a former executive vice president at Saudi Arabian Oil Co., the world’s biggest crude exporter, told Bloomberg before the press conference. “The drilling will be deep,” he said.

Finding the new deposit is an initial step. Determining how much of the hydrocarbons can be exploited commercially and starting production from accessible reserves may be a costly, years-long effort.

A single shale well onshore will cost about $7 million to drill and frack this year, according to a 2017 Citigroup estimate. A well on the new Bahrain offshore deposit will cost “no less than $20 million,” according to al-Husseini.

Bahrain estimates there are 81.5 billion barrels of shale oil and 13.7 trillion cubic feet of natural gas of resources in the basin, the oil minister said.

The two appraisal wells will help to determine how much of this can be produced. The waters of the Gulf are shallow in that area, which will help reduce production costs, he said.  Initial flow tests were positive with the reservoir rocks showing good porosity, the ministry said in an emailed statement.

The new discovery can potentially turn Bahrain to a major player in the oil market, according to experts.

The new field is significantly larger than Bahrain Field which produces around 45,000 barrels per day. Bahrain also produces 160,000 barrels of oil per day from an offshore field which is shared with Saudi Arabia.

The Bahrain field that was discovered in 1932 is about 15 kilometers long and 5 kilometers wide.