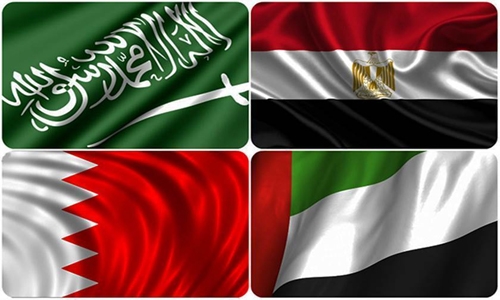 Manama : The Arab Quartet - Bahrain, Saudi Arabia, United Arab Emirates and Egypt - yesterday rejected a report by the UN Technical Mission of the Office of the High Commissioner for Human Rights (OHCHR) on Qatar crisis.

The Quartet denounced the report submitted by the UN body for baseless allegations and accusations and taking sides with the Qatari narrative.

The Quartet said that the report is built on frail claims that the Qatari government intends to market regionally and internationally.

The Quartet noted that the crisis was the result of Qatar’s support for individuals and entities internationally involved in financing terrorism, supporting its activities and promoting its extremist ideology that incites to violence and spreads the discourse of hatred in the Arab region using media stands that are either directly or indirectly belonging to Qatar or financed by the Qatari figures. The OHCHR submitted the report after its visit to Doha between November 17 and 24. The Quartet affirmed that their boycott of Qatar falls under the practice of their sovereign rights to protection and defence of national security and comes as a normal response that is incomparable in size or effect to what Qatar has perpetrated through its support of terrorism.

The Quartet further said that the report is in clear breach of the UN Charter, international law and relevant decisions by the Human Rights Council and the General Assembly which admit the negative repercussions of terrorism on human rights.

Furthermore, the Quartet affirmed that their measures do not target the Qatari people who share with them bonds of fraternity, blood kinship and affinity and even hail from the same tribes as the people in some of the boycotting countries.

The Quartet noted its reservation on the timing and the way the report content was leaked by the Qatari National Human Rights Committee during the press conference it held on January 8, 2018 in Doha and that the office of the High Commissioner has not sent them the report until after it was published on Monday January 8, 2018.

The four countries affirmed that the technical reports prepared by the Office of the High Commissioner on the request of the member-states aim to transfer expertise to develop the human rights system and treat human rights violations that occur in the same state.

The Quartet noted that it was clear that the main target from the Government of Qatar’s invitation of the OHCHR Technical Mission was to exploit it and its report in its political and media propaganda and was not for the noble goal of the Qatari side getting the Mission’s technical expertise transferred to it.

Furthermore, the four countries denounced Qatar’s continuation of its policies that lack credibility and involve ill-intention in dealing with United Nations and its international specialized technical agencies and the reports they issue.

The four countries called on the Office of the High Commissioner to repair the methodological and procedural errors in the report which have failed to meet international criteria and OHCHR competencies so that its reports would no more mismatch the nature of the Technical Mission’s job or extend their negative impact beyond the geographical scope of the state which asked for technical support.

The four countries maintained that Qatar’s underestimation of any serious initiatives to solve the political crisis and continued attempts to mislead the international community with regard to the real causes of the crisis by approaching the international organizations to throw the blame on the boycotting countries despite the laudable efforts of His Highness Emir of Kuwait, Shaikh Sabah Al Ahmed Al Jaber Al Sabah, indicate that it does not have - in the foreseeable future - any intention to get its ties restored with the four countries.