US decision on Jerusalem threat to peace in region: Bahrain FM | THE DAILY TRIBUNE | KINGDOM OF BAHRAIN 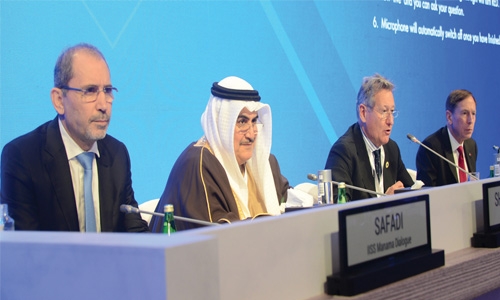 “For the two-state solution to be possible, East Jerusalem must be free of Israeli occupation,” he said, addressing the plenary session on the second day of ‘Manama Dialogue’.

He said that US President Donald Trump’s decision to recognize Jerusalem as Israel’s capital comes as a huge blow to the Palestinian people who have been fighting for their freedom in the territories illegally occupied by Israel.

“This past week we all heard the President of the United States announce his decision to recognize Jerusalem as the capital of Israel. As a long-time friend and ally of the United States, we do not and have never questioned the intentions of the United States towards the stability and prosperity of our region. However, this move threatens the peace process on which millions have pinned their hopes and aspirations. It hinders progress on all past and present initiatives and violates relevant United Nations resolutions, and of course, the central right of the Palestinian people, to free East Jerusalem from occupation,” Shaikh Khalid said.

“If we in the region are going to build modern countries on ancient claims, we will face one claim after another and never ever achieve a durable peace in a region with an endless number of possible ancient claims where empires and nations have risen and fallen, borders have continuously shifted, and where boundary disputes are a primary source of instability of our region today,” Shaikh Khalid said while affirming the importance of the United States in achieving a lasting and durable two-state solution in accordance with the relevant international agreements and the Arab Peace Initiative.

Referring to Qatar crisis Shaikh Khalid said that responsible countries of the region recognize that ending the role of terrorist organizations and violent non-state actors is a priority. “That is why Bahrain, the Kingdom of Saudi Arabia, the UAE, and Egypt took the decision to boycott Qatar,” he said.

“Our actions against Qatar are the result of decades of Qatari policies that threatened and jeopardized our national security, and came as a last resort after Qatar failed to honour agreement after agreement,” Shaikh Khalid said.

“We had always given Qatar the benefit of the doubt, we have always sought to work out our differences with Qatar in a quiet manner, with the close cooperation of GCC members for the sake of preserving GCC unity. But unfortunately, that approach was not sufficient, and we realized that more urgent measures were  required,” Shaikh  Khalid  said.

“Some have claimed this is about Qatar adopting a foreign policy independent of the GCC, it is not. The aim of our actions is to stop Qatar from plotting to undermine and weaken our governments, and from supporting terrorist groups that destabilize countries like Egypt, Yemen, and Libya and to stop their interference in other countries seeking to influence its domestic politics for its gain,” the Bahraini foreign minister said.

The groups funded by Qatar in Libya should be of particular concern to Europe, as terrorist groups establish bases in Libya from which they could easily access the European continent, he said.

“Our Quartet is prepared to return our relations with Qatar to what it was before, with the provision that Qatar finally abides by the agreements it has already signed and stop its support for terrorism and undermining our countries and the interference in the domestic affairs of other states,” the foreign minister added.

Williamson said that at least £10 million will be invested by the UK to strengthen Iraqi counter-terrorism. He said that terrorism must be fought not only on the ground but also by “shutting down their social media mouthpieces”.